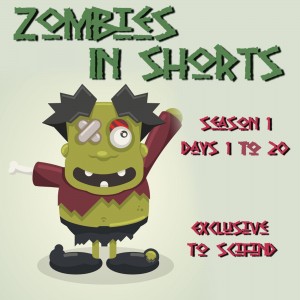 About 3 years ago (March 2013) in a twitter conversation with Neil Gardner of Spokenworld Audio and Ladbroke Audio I stated I was looking for a zombie related feature I could roll out over a few weeks. Well a few days later Neil presented me with ZOMBIES IN SHORTS a micro 20 episode epic zombie series of madness.

I have now decided to give this epic zombie comedy (Zomedy?) a home on the streaming site SOUND CLOUD.

I am uploading episodes now, and hope to have them all online soon.