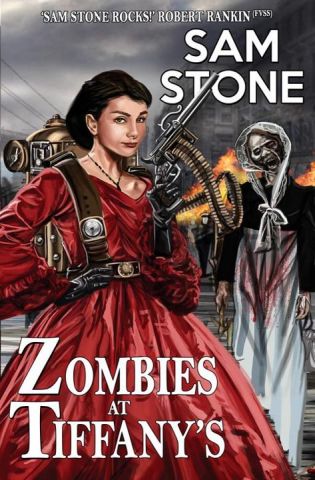 Stephen James Walker, Editorial Director of Telos Publishing in London, has acquired world rights in a new zombie novella by Sam Stone. The novella, entitled Zombies at Tiffany’s, will be published in September 2012.

Sam is the award-winning author of four vampire novels collectively called “The Vampire Gene” published successfully by The House of Murky Depths. A fifth title in her series, Silent Sand, is due to be published in the autumn. She said, of this deal:

“It’s great to be back working with Telos again after the superb job they did with my horror collection Zombies in New York and Other Bloody Jottings last year. The new novella is riffing on the famous Audrey Hepburn/Blake Edwards film and the novella by Truman Capote, but it’s not the same as either. I enjoy playing with the genres, and this time we have a steampunk Victorian adventure. With zombies. In the famous Tiffany’s store in New York. It’s a lot of fun, and I even have a Jewish zombie wandering around who can only eat Kosher brains  that’s a nod to the character of Shagal the Inn Keeper, brilliantly played by Alfie Bass in the Polanski film The Fearless Vampire Killers.”

Sam Stone’s first novel, Killing Kiss, won the silver award for Best Horror Novel in ForeWord Magazine’s Book of the Year competition, and her subsequent novels and short stories have gained her much acclaim, including winning the British Fantasy Award. She holds an MA in Creative Writing and is a noted public speaker and lecturer. Sam’s website is at www.sam-stone.com, and Telos Publishing is at www.telos.co.uk.