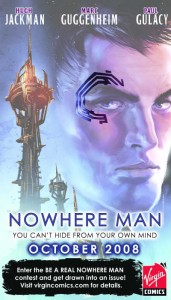 Hugh Jackman, Marc Guggenheim, Paul Gulacy and Virgin Comics have teamed up to bring you a new comic book series Nowhere Man and they have a very special promotion to launch it

Ever wanted to appear in a comic book? Well, thanks to Nowhere Man and Virgin Comics here is your chance! To celebrate this fall?s debut of the highly anticipated new Virgin Comics series Nowhere Man, from the creative team of Hugh Jackman, Marc Guggenheim and Paul Gulacy, Virgin Comics is giving 5 randomly selected winners a chance to be a real Nowhere (wo)Man and get drawn into an issue!! How cool is that?

Will you be a government agent? A bad-ass assassin? You’ll have to win to find out. Not only will you appear in an issue, but Hugh Jackman, Marc Guggenheim and Paul Gulacy will all personally autograph the copy of the issue that you appear in!

And if you’re not one of the few lucky winners, don’t worry? you could always be one of the ten runner-ups to receive a copy of Nowhere Man #1 autographed by Hugh Jackman!

Enter now at www.virgincomics.com/nowhereman. The contest runs through September 15th, 2008.

Nowhere Man takes place 500 years in the future, when the Earth’s population has been infected with a virus that allows an oppressive government to monitor their thoughts. It’s the Patriot Act gone haywire. But a group of rebels have engineered the ultimate weapon: a genetically altered child, born immune to the virus. He’s the only one on the planet who can bring some semblance of privacy and individuality back to the world. He is the Nowhere Man.