I guess we are all used to the kind of sci-fi that allows for action, alien invasions, killer robots from the future etc., but how many movies are there that you can think of that have that extra dimension of special qualities, heart-warming and gentle? Let us take a look at five that come to mind, perhaps you have not watched them all…

An obvious one, perhaps, but still… A classic tale of abandonment, new-found friendships and rescue. Kind of like “Home Alone 2: Lost in New York” except it’s “Home Alone: Lost on Planet Earth” and the U.S. government are on a manhunt… Though not her debut film, “E.T.” starred a very young Drew Barrymore and would be the break she needed – how cute was she? Written by Melissa Mathison, and directed by Steven Spielberg, this was one journey that received a tide of positive reviews and responses such as “This is not simply a good movie. It is one of those movies that brush away our cautions and win our heart.”

Though it is violence-free, and has some of the best comic scenes ever written for science fiction (who cannot laugh at E.T. exploring the refrigerator and discovering Coors beer?), a re-release did see an extended version of the film where federal agents had their guns digitally replaced with walkie-talkies.

For a man who gave us such dark tales as Halloween (1978), Assault on Precinct 13 (1976), and The Thing (1982), John Carpenter’s step into the world of light-hearted sci-fi fantasy gave us Starman, starring Jeff Bridges (Tron)  and Karen Allen (Raiders of the Lost Ark). This is the perfect example of how, when we invite other life forms to “visit”, there is the general rule of shoot first and ask questions later…

Though the alien is initially a blue ball of energy, it isn’t long before he takes on the appearance of a woman’s dead husband after scanning a lock of the man’s hair. The relationship that both he, the Starman (Bridges), and widowed Jenny (Allen) develop is very effective and holds the film together extremely well. 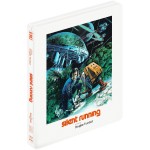 This is one of those movies that really takes you on an emotional journey. Should I admit that this one made me cry by the end? Ahem. Depicting an Earth devoid of plant life, the only specimens preserved on greenhouse-like domes aided by space freighters in the Solar System in preparation for return to our planet and reforestation. Though heavily environmentally-themed, Silent Running does manage to entertain even if it is slow going throughout. Bruce Dern as botanist Freeman Lowell on board the Valley Forge is the highlight here, along with his robot drones who he eventually nicknames  Huey, Dewey, and Louie instead of using their numbered assignments.

I will forever remember this movie for one of the songs, “Rejoice in the Sun” sung by folk artist Joan Baez.

Eight years might not seem like a long time but just imagine finding yourself eight years in the future, how might life have changed for the people who lived around you? For 12-year-old David, this is precisely what happens one day after waking up from a fall in a ravine in 1978, only to find that the world he knew has changed. But what does all of this have in connection with a crashed spacecraft?

Add into the mix an artificial intelligence which David nicknames “Max”, and a star-chart that only the boy has access to, and you have one of the most light-hearted sci-fi tales in many years. Also starring a young Sarah Jessica-Parker as Carolyn (an intern at a government facility where both David and the spacecraft are being held), it has been reported that a remake is in the developement stage.

We all dream of that moment when a signal is detected, directed at Earth from outer space, or a personal experience with a close encounter of the third kind. So just imagine, three teenagers who embark on a journey unlike any other, building a makeshift spacecraft using a Tilt-a-Whirl and visiting another galaxy… Directed by Joe Dante, this light-hearted sci-fi film starred Ethan Hawke, River Phoenix, and Jason Presson. Though initial reception wasn’t completely positive at time of release, the movie has become something of a “classic” among sci-fi fans these days.

One thing to remember, this is no E.T., and the absurdity of the aliens who the boys encounter is a reminder of that. However, this is first-class fun for the children, and a decent enough tale for adults, too, who would enjoy nothing more than building their very own spaceship and exploring the stars…