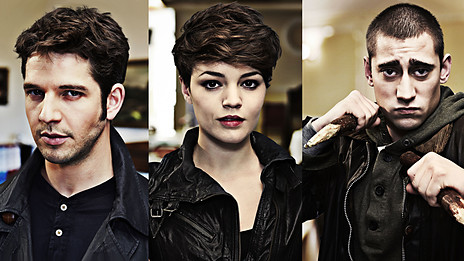 I’m a weird Being Human viewer. I remember the pilot being shown and adoring it. It was a perfect combination of full bore supernatural contemporary drama and the sort of crappy bedsit sitcom/drama that British TV does so incredibly well. You got the sense that Mitchell, George and Annie would pop round to Meteor Street to hang out with Tim and Daisy from Spaced, any time they were in London, that kind of thing.

Then the uber plot arrived and the show began to pull away from me. The opening half of series two, with Mitchell struggling to rule Bristol’s vampires and the arrival of the glorious Daisy and Ivan, was fantastic and then…it turned out that anyone with any sort of religious faith was either a dangerous fundamentalist or a pervert.

I’ve got no interest in having the Religion Conversation but the show’s ridiculously simplistic view of faith managed to erode a lot of the good will it had built up.  Nonetheless I stuck with it and season three was largely great. Not only was Adam the teenage vampire huge fun (And Becoming Human, the online spinoff featuring him desperately needs more episodes), but the fact Mitchell was never off the hook for his actions in the second series made for fascinating drama.  Whilst series three had some missteps; Mitchell and Annie in the least romantic romantic relationship ever, deciding to bring Herrick back, the entire thing had a real sense of impending doom to it. The series culminated in the fantastic, horrifying scene where George kills Mitchell to save him and the final shot, of a tearful George, Annie and Nina preparing to go to war with the vampires once and for all, promised so much.

Then Sinead Kiernan left between seasons.

Then Russell Tovey admitted he was only appearing in one episode.

Which meant the only one of the original trio left was Annie.

Whilst I’ve enjoyed Lenora Crichlow’s work tremendously elsewhere, her version of Annie has always been far too scatty and frantic for me, especially after Andrea Riseborough’s fantastic, quietly laconic turn in the original pilot. To make matters worse, Annie’s plot had followed the same ‘lack of confidence, traumatic event, Akira level powerburst when narratively necessary’ track for three years. It was getting old and I really wasn’t relishing an entire season with Annie as the lynchpin.

If you toss a coin enough times, it will eventually land on its side.

That was Being Human season 4.

Despite being a season dealing with both a prophecy and a baby, two plot elements surely up there with ‘Long lost twin brother’ as overcooked narrative devices, season four was actually the strongest year the show had ever had. Whilst a couple of the comedy beats fell more than a little flat, the overall plot was extraordinarily well done. George and Nina’s daughter, in a future dominated by the vampires, has herself killed so she can travel back in time to try and change the future, at the same time as the oldest vampires on Earth are coming, it seems, to kill her younger self.  The stakes raised constantly, the fact that the baby, Eve, represented her parents as well made for real emotional weight and the final twists in the prophecy were really nicely handled.  Eve, instead of being a narrative crutch, became the hub for the entire season, and whilst there was the obligatory ‘Annie is awkward and cute around the baby’ stuff, this was the year that they finally let Crichlow do something other than mildly scatty. By the end of the season, Annie, along with new boy Hal and holdover from season 3, Tom, was a veteran, a woman who has seen her entire circle of friends die and knows with absolute certainty what she needs to do to make things right.  Until, of course, she doesn’t, because nothing is easy in this world especially when you’re dead.

Annie’s final shot in the series is perfect. Stepping out of Purgatory, with the baby in her arms, we see Annie open a door and smile, beatifically, her entire face lighting up. We know, without ever having to see them, that Mitchell, Nina and George are waiting for her.  It’s a beautiful capstone for the first iteration of the series that, somehow, manages to be a farewell for all four originals even though we only see one.

So as series five opens we have; Alex, a newly murdered ghost who’s death is sort of Hal’s fault, Hal, a centuries old vampire who’s renowned for being savage when he’s off the wagon and is going through detox and Tom, loyal, dependable, werewolf Tom, raised to fight his ‘father’s’ war since he was a baby.  The Cleaners, the mysterious, suited men who clean up after supernatural incidents who were introduced at the end of the last season are back and the always splendid Phil Daniels is playing the series villain, Captain Hatch. And we’re still in Wales. Is there the possibility it will go utterly wrong? Of course, this is Being Human, there’s always that possibility. But against all odds, and every single prediction, this is a show heading into its fifth season looking healthier and more interesting than it ever has before. If you’re not a fan yet, give it a shot. There’s nothing on TV quite like it.

Being Human series five starts on BBC Three at 10pm