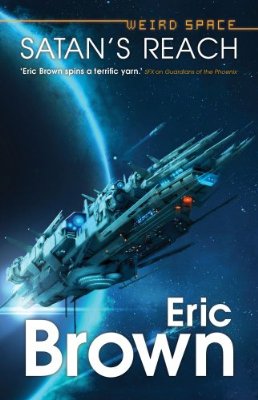 Sci-fi master Eric Brown is continuing to expand the Weird Space universe with Satan’s Reach. Eric’s new fast paced action-adventure pits humanity against unimaginable terror from beyond (as all good Sci-Fi should).

Telepath Den Harper did the dirty work for the authoritarian Expansion, reading the minds of criminals, spies and undesirables, for years. Unable to take the strain, he stole a starship and headed into the void, a sector of lawless space known as Satan’s Reach. For five years he worked as a trader among the stars – then discovered that the Expansion had set a bounty hunter on his trail.

But what does the Expansion want with a lowly telepath like Harper? Is there something in the rumours that human space is being invaded by aliens from another realm? Harper finds out the answer to both these questions when he rescues a young woman from certain death – and comes face to face with the terrible aliens known as the Weird.

Weird Space: Satan’s Reach is out in paperback and ebook 25 June (US & Canada) and July 4 (UK)