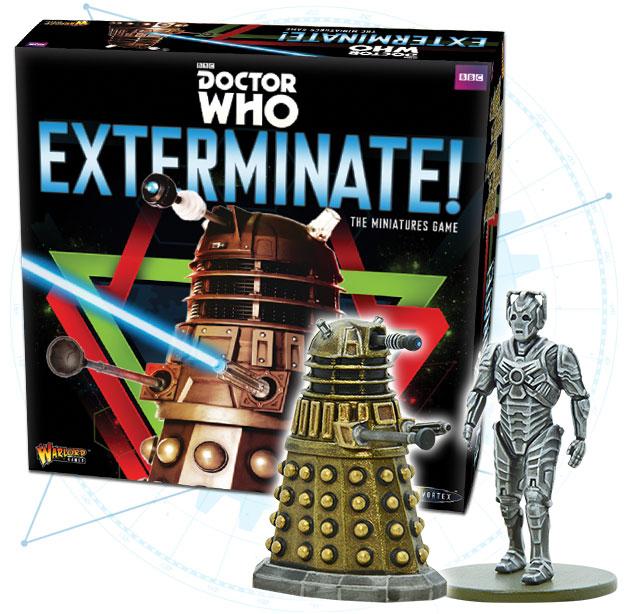 Warlord Games really hit a home run with their Doctor Who Into The Vortex miniatures / skirmish game when they released it at Salute 2017.
The Warlord stand and the Exterminate core set for the game was my first point of call and first purchase of the day.

In the Exterminate! miniatures game your Cyberman and Dalek forces can recruit neutral factions, improving their chances of success and adding even more variety to your games.
These highly detailed plastic Cybermen and Dalek miniatures are ‘push-fit’ allowing them to be easily built without glue.

As well as this core set with plastic miniatures Warlord Games have an ongoing release of metal miniatures for use in the game, or for collectors / painters. Previous releases have go included Judoon, Zygons, various Doctors and Companions and a medley of monsters.

View a selection of games and miniatures at Element Games

Here’s a sneak peek of two figures from the forthcoming Voyage of the Damned episode set. Astrid Peth as played by Kylie Minogue and David Tennant as the Tenth Doctor.

The other three figures from this set will be revealed shortly.

Again Warlord have captured the essence of the characters in 38mm*. With the moulded named bases these are ideal for the collector in addition to the gamer. I suspect that the gamer will be mounting these on 30mm bases for the sake of the game.

I just wish I could paint as well as the person who prepared these minis for these images.

Ogrons: often used by the Daleks to do their dirty jobs

Hailing from the outer fringes of the Mutter’s Spiral, Ogrons are tall, ape-like humanoids of limited intelligence. Due to their great strength and mindless obedience, they are typically used by other species as mercenaries.
The most common employer of Ogrons were the Daleks. In Day of the Daleks, they used Ogrons to control the human population after their 22nd-century invasion of Earth.

The Woman Who Lived.

An ordinary Viking girl killed after a battle with the alien Mire, Ashildr was resurrected by the Doctor using a Mire repair kit which was able to fix her physiology.
Now with a potentially infinite lifespan, she chose aliases such as Lady Sherade, Ash, El Dir, Alys and the Knightmare, having forgotten her original identity over the centuries.

*correction 24/8/2017 Warlord have let me know that the miniatures are 38mm scale rather than the wargame standard of 28mm, allowing for greater detail and for the figures to be more in proportion than their 28mm counterparts.