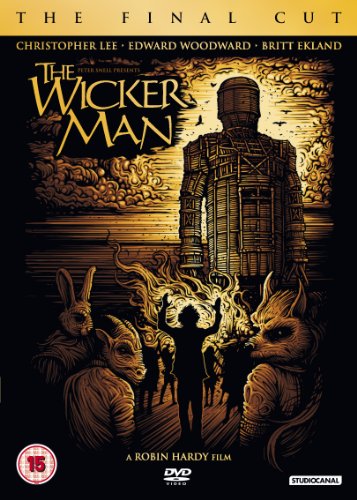 This new version of The Wicker Man only makes slight changes. However, it’s the most complete version of the film that exists currently, and if you’ve only ever seen the original theatrical release (the one most regularly shown on TV), you’ll be astonished just how butchered it was. The fact that the theatrical release is still a superb film is testament to just how good a movie it is. As a result, a more complete version is something to celebrate.

If you’ve already got the Director’s Cut, then it’s debatable whether this adds enough to justify another purchase. The changes are minor, but they’re all improvements.

The basic story remains the same – uptight Sergeant Howie goes to a remote island to search for a missing girl, and uncovers a disturbing conspiracy. The main changes are that it makes more clear that the action takes place within a defined timeframe – just three days. This may not seem important, but it adds a sense of Sergeant Howie’s exhaustion, which gives an extra element to Edward Woodward’s performance. With these changes on top of the director’s cut that already exists, it just helps everything hang together that bit better.

Here’s an example of how it improves it – one of the most famous scenes in the movie is the one where Britt Ekland’s Willow dances naked in an attempt to seduce Howie. With each version of the movie that comes out, this scene makes more sense. The placing makes more sense (with the movement to the second night, and the insertion of an earlier scene which shows Willow being brought a boy to deflower), and even the layout of the rooms makes more sense (as external shots show the way the rooms are next to each other, which means that when she’s making noises against the wall, it’s clearly on the other side of the wall of Howie’s room – without it, there’s a disconnection, and it looks like they’re against different walls). It’s not something that everyone will notice, but it’s clear how much was sacrificed for the theatrical cut.

It has to be said that the drop in quality of the recovered footage is noticable, so if it’s the kind of thing that’s likely to bother you, you may want to skip it. But the extra texture that these scenes add to the story means that it isn’t as much of an issue as it could be (and it’s not the fault of the restorers – this is, realistically, as high quality as was possible, and it’s obviously been done with great care).

On top of the theatrical release, it’s also worth seeing for far more of Christopher Lee’s Lord Summerisle, which is his favourite of his own performances. And he’s right – it’s one of the most subtle, nuanced performances he’s ever given, and he’s both charming and sinister. It’s a bonus to get more of him in the film.

Along with the new release, The Wicker Man is being re-released across the UK in cinemas, and if you haven’t seen it on the big screen, it’s worth taking the time to do so. It’s a beautiful looking movie, and it’s a rewarding way to watch it.

To put it simply, The Wicker Man is one of the greatest films the UK has ever produced, and this was despite the fact the film-makers regularly described the most widely-seen version as a compromised one. The more you see of what was cut, the more you can understand why they feel like this. The more complete version adds more to the pacing, performances and texture of the movie. With a film this good, that’s worth taking the time to see. It’s the best version out there of a brilliant film.