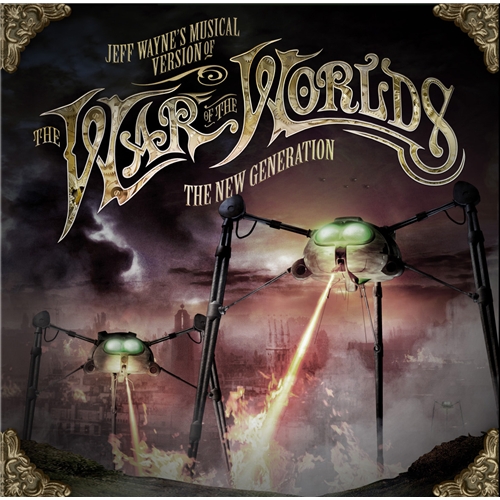 In November 2012, Jeff Wayne released a new version of his seminal 70s concept album, based on HG Wells’ novel. Where once Richard Burton spoke of “minds immeasurably superior to ours” in his inimitable Welsh burr, now Liam Neeson narrates the words of The Journalist. It takes some getting used to, but this new roster of artists, from Maverick Sabre to Ricky Wilson, give the work a fresh coat of paint. What follows the new album release is a new live show, utilising a holographic performance from Neeson, and replacing all of the new album singers, save Wilson, with seasoned stage performers like Kerry Ellis and Jason Donovan.

As a fan of the original double album, I’ve longed to see the live TWOTW show for years, with its fabled life size tripods and CG film backdrops. So, last Saturday, I found myself at the O2 Arena for the New Generation Live.

Doors opened more than an hour before show time, but with a background music soundtrack drawn from the album, and cast members interacting with the audience, there was plenty to get my excitement up. Then, as a large string section took their seats on one side of the stage, with an electric rock band on the other, Jeff Wayne stepped out to receive applause and conduct proceedings from the stage.

Opening with a new prologue, two Victorian astronomers detect strange activity on Mars. A CG film sequence then takes us to the Red Planet, where a Martian council of war is being held. From there, the first half keeps to more familar territory, with Marti Pellow handling the sung parts of the Eve of the War and Forever Autumn, and the 30 foot Martian tripod descending to the stage to catch swathes of the audience in its spotlight heat ray.

This first half was loud, the musicians and visuals creating a multi-sensory experience that felt like being in the middle of a war. At times, the live singers fought to make themselves heard above the music, only Liam Neeson’s pre-recorded part taking dominance in the proceedings.

The second half opens with another new sequence, as the Journalist addresses his lost love, Carrie, in his mind’s eye. With both Neeson and the actress playing Carrie on two video screens, there was little emotion in this scene, which was further scuppered by Carrie’s dialogue being inaudible in the Arena.

After this mis-step, however, the show came into its own, with fantastic performances from Ellis, Donovan and Wilson. I’ve always felt the second disc of the album to be the stronger, and so it proved live, with the power of a true stage musical. And while the reappearance of the Tripod had lost some of its power, a brief cameo at the end brought the walls down, if not the house.

A fantastic show then, but I left with a few niggles. The CG sequences, while deliberately 70s in style, became a little repetitive after a time, with too many appearances of an unexplained flying Martian machine. But the biggest problem is Neeson, or rather his pre recorded performance. Whether on a large film screen or on stage as a rather limited hologram, the barrier this created could not be overcome by the live performers who had to act, and sing alongside him. The most powerful scene of the show was between Kerry Ellis and Jason Donovan, as they could act more naturally with each other.

Perhaps what is needed now is for someone to take a fresh approach with Wayne’s music. A recast narrator who could tour with the show, ideally one who could also sing his music parts, would be a good step forward, and more live action on stage could reduce the reliance on CG film. And some of the bridging music from the album could also be trimmed live. The War of the Worlds: The Next Generation anyone?