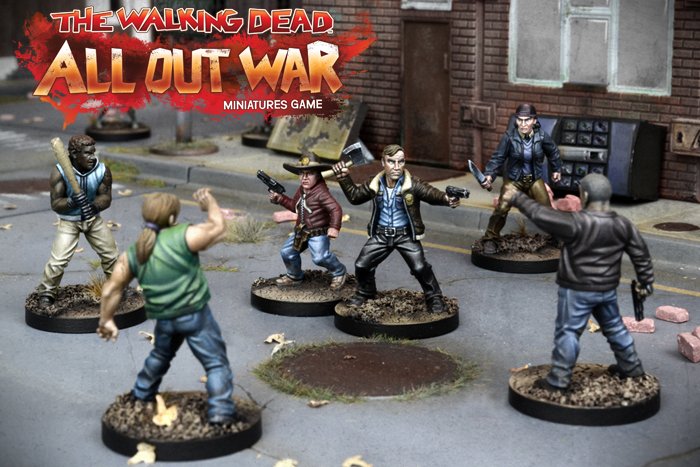 Producers of the amazing The Walking Dead: All Out War Skirmish Game, Mantic Games have revealed details of the Wave 3 Character booster packs.

The Walking Dead: All Out War is a miniatures game of fast-paced, head-to-head skirmish game set in the iconic world of The Walking Dead comic books.

You can buy The Walking Dead Game from your FLGS or online retailers like Element Games or Amazon.

The Walking Dead:Safety Behind Bars!

In this expansion, Rick and the other Atlanta survivors travel from Hershel’s Farm to the Meriwether County Correctional Facility.

For the first time in The Walking Dead, you’ve now got to fight the Walkers in the claustrophobic confines of a map with an interior! Though many players have been using buildings to date.

Armored Walkers are introduced. These are prison guards in riot gear turned, so they are extra tough.

Then there are the Wave 3 character boosters.

The Maggie, Prison Defender Booster comes with models for her and her sisters, Susie & Rachel, and an extra walker.

Maggie has grown and this is shown in her new stats. Her previous card’s ability Survival Instinct, which allowed her to choose the preferred of two panic dice, has been upgraded to Faithful Unto Death. She will now never panic as long as Glenn is alive and on the board. With Steadying Influence, Maggie is also able to control the threat level, rolling 1 White Dice when making a Hold Your Nerve action, reducing it by that much. Both of these combined can help your groups of survivors keep their cool in those tense late-game turns.

Her melee attacks have an added red dice, bringing her up to two, while her shooting has been upgraded from a red dice to a white dice. While her health has also gone up to five and all of these upgrades have only cost 6pts more than her previous incarnation.


Clearing out the prison is a dangerous job, so Glenn is equipped to deal with the Walkers in his Riot Gear! However, he’s not the only one with a little bit of extra protection, and the Walker is also protected by armour also.

Alongside Glenn, the booster also includes Wes, one of The Governor’s henchmen from Woodbury. Although on paper Wes appears to be a little useless, the Adrenaline Junkie ability could make him useful in the later stages of the game… if he manages to survive that is!

Game is produced by Mantic Games – You can find them online HERE.