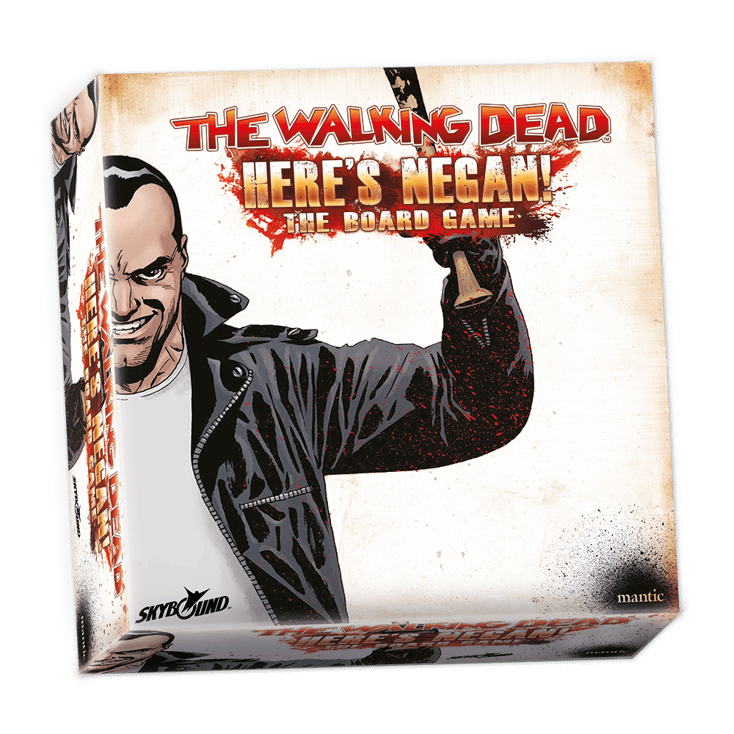 Reputation is everything as you experience the untold story of how Negan and the Saviours cleared the Sanctuary.

In Here’s Negan the board game, each player takes on the role of one of Negan’s ambitious lieutenants. To win the favor of their despotic leader, Sherry, Dwight, Laura, John and Tara must help clear the ‘Sanctuary’ of deadly Walkers. Danger lurks around every corner, however it’s not always the Walkers that pose the biggest threat…

Work together to clear the claustrophobic corridors of the abandoned factory, but that’s only part of the mission. You must also do whatever it takes to gain Negan’s respect and players ‘win’ by earning the most ‘Reputation Points’.

The in game miniatures are in scale with the Walking Dead All Out War skirmish game, so you can have some extra miniatures to use in that game also.

“The Walking Dead: All Out War Miniatures Game is our most successful retail product ever and we’re delighted to be working with Skybound Entertainment to explore this untold chapter of Negan’s history,” said Ronnie Renton, CEO Mantic Games. “Here’s Negan is a totally unique game that sees players working together but also gives them the opportunity to screw over their teammates to impress Negan. It’s co-operative and competitive so you’ll need to watch your back!”

Pre order is available here and if you pre-order before November 19th 2018 to receive pre-order exclusive free cards to use Dwight, Laura, John, Tara, and Sherry as survivors in The Walking Dead: All Out War