JK Rowling who wrote a few small print run books about a guy called Harry Potter is bringing back the Harry Potter Universe (potterverse? harryverse?) with a non Harry Potter title called The Tales of Beedle the Bard. 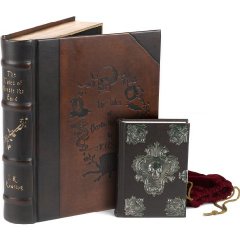 The Tales of Beedle the Bard is a collection of fairy tales written by Harry Potter creator J.K. Rowling? and is set in the Harry Potter world, and is available to pre order now from AMAZON

J.K. Rowling‘s The Tales of Beedle the Bard, is very special book of five fairy tales illustrated by the bard herself, embellished with silver ornaments and mounted moonstones. Amazon was fortunate to come into possession of one of the original copies, and it was our privilege to share images and reviews of this incredible artifact. Now J.K. Rowling is giving millions of Harry Potter fans worldwide cause for celebration with a new edition of The Tales of Beedle the Bard (available December 4, 2008) and Amazon is thrilled to exclusively offer a luxuriously packaged Collector?s Edition designed to evoke the spirit of the handcrafted original.

Ok it is ?50 – but there is a standard edition also available for under ?5.

Pre order either edition now, (using the links above) and you will receive amazon’s Pre-order Price Guarantee: order now and if the Amazon.co.uk price decreases between the time you place your order and the release date, you’ll be charged the lowest price