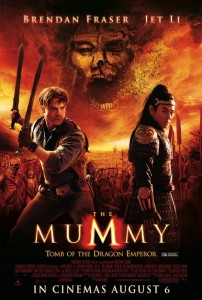 With the release of The Mummy: Tomb of the Dragon Emperor this weekend scifind.com presents a glimpse into the mind of director Rob Cohen.

Director of The Mummy’s third movie installment, Rob Cohen is tired, sitting here in this Soho Hotel. This interview is made in early June when Rob Cohen is in the finishing stages of post-production supervising the scoring for The Mummy: Tomb of the Dragon Emperor with London?s Symphony Orchestra. Rob appears to be enjoying himself, his wife has recently given birth to triplets and he is full of enthusiasm for his vision of the latest instalment of the Mummy franchise.

Rob Cohen: It?s fantastic, Randy Edelman has done such a great job with the music but having it scored by the London Symphony Orchestra at Abbey Road, you cannot get any better, you cannot do better! It has just been a joy. And I wanted to do some publicity while I was here because now I am a father of 3 new babies, so if I can talk to people while I?m here it will be easier than trying to arrange coming back.

Q: Can you tell us what Tomb of the Dragon Emperor is all about?

Rob Cohen: To unite the themes, it?s about the quest for immortality. But this time, the quest for immortality is uniquely Chinese. And uniquely invested in a real historical personage. This Emperor, the first Emperor of China, was a very complex character. He was a genius of nation building but he was brutal beyond conception. And after he conquered all of China, unified the written language, unified the road system, unified the money, he then turned his entire life force to becoming immortal. And basically from my research, I think, he died prematurely trying to be immortal.

The seed of the script was that this Emperor and the Terracotta Army of Shi Haung were the mummies and if he comes back alive, he?s going to raise the army and conquer the world again. The idea that I could bring the Terracotta Army of Shi Haung up above ground, and back into battle and that they would be the mummies and that Brendan Fraser, Maria Bello, Luke Ford, Isabella Young and Michelle Yeoh would have to find a way to battle them was just too tempting.

And so that?s really what it?s about, plus it has creatures for the first time. Jet-Li plays a shapeshifter and at a certain point in his ?reboot? as a mummy, he gets back the ability to become a three-headed dragon as well as this big pit-bull temple guardian dog! Plus we have the Yeti and all the undead that built the Great Wall of China that were buried underneath. It has 949 visual effects shots, all very complex 3D work, I have 338 to go. It?s a movie that?s different in tone from the others, it?s not so goofy, its got humour but it?s not jokes. Brendan is much more real, he?s struggling with a son and the son is struggling with a dominant dad. Old bull, young bull. It?s got a lot of cool stuff in it!

Q: Did you have any concerns about taking on the franchise and resurrecting it?

Rob Cohen: No, not really. I?ve never done a sequel to my own movies and I don?t like the sequels that have been done to my movies. The point is, I think there is always new and fresh stuff to do. And that?s what made my career, looking for the new thing that would be challenging and exciting trying to figure out. Once I read the script, I knew what I wanted to do with it, which was to change it a lot.

Q: How did you go about changing the script?

Rob Cohen: I went to see the producers, including Stephen Sommers, and I said, ?look, it has to be a movie of mine, not a movie that?s sort of a movie of yours? and I wanted it to be clear on what that would mean. I laid out my 10 talking points about the script and the casting and I said if you like these ideas then we should go to the studio but if you don?t like this then let?s not. They talked and they felt comfortable.

Q: And what was different about the movie you had in mind?

Rob Cohen: I don?t like goofy humour or slapstick. I like adrenaline inducing action, not people making jokes in the middle of the action. I just like there to be jeopardy and tension and I like it to be a ride and fun. I?m not trying to turn it into The Bourne Identity, but it?s got to be closer to the Raiders (of the Lost Ark) model. Everyone was behind that. And that?s when we got going and that?s why I didn?t have any fear because it was basically, ?I?m going to do my version of a Chinese movie about mummies?, as opposed to ?I?m doing The Mummy 3?, and this is why I changed the title to The Mummy: Tomb of the Dragon Emperor as opposed to The Mummy 3. So it?s its own new thing.

Q: And what were the biggest challenges?

Rob Cohen: Well the special effects were a big thing. But the biggest challenge was to get a script and get a cast and get a story that made you really invest in the people. That?s always the hardest thing. I learned from Stealth, I made a profound set of mistakes. I got caught up of with doing a movie in the air at mach 3 and I worked so hard on solving these impossible technical challenges that seemed so difficult that I lost the people and when you lose the people, the effects just become nothing. If you got great characters and then there?s some flashy action or special effect stuff, then everybody is cool because they are invested in the characters. So I learned, and that was the challenge. Can we tell a family story that actually has emotion in the middle of this big spectacle? I think we did that and I think you will be surprised at the connection you will feel.

Q: There is a wealth of acting talent on show in this movie, what was it like working with such a fantastic cast?

Rob Cohen: We worked our asses off and we suffered through some pretty intense conditions in the deserts and in China. I mean, daily I had to find a new place to use as the bathroom!
It brought us closer together, we lived in a dingy Chinese 2 star hotel at night and it took over an hour and a half to get from the set to the hotel each way ? there were pot holes in the roads to the point that you had to go 1 mile an hour so you don?t break the axles! And these people were with me but never ever complained. Everybody laughed about how tough it was but nobody went, ?I?m calling my agent, I don?t have my double banger trailer!? I mean, Brendan, Maria, Jet, Michelle, there were all out there, Luke, Isabella, Russell and everyone dealt with it and you will feel that in the performances. They are there, you aren?t in some CG green screen world, not Morocco, you are in China. Really in China. And you feel it because China has a very unique energy and it?s very visually rich and I tried to make the film have that cultural richness. The first 10 minutes of the film are in ancient Mandarin with no English.

The Mummy: Tomb of the Dragon Emperor is released on the 6th August 2008.