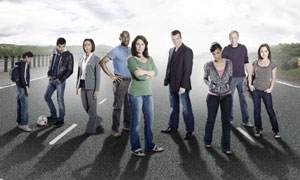 The BBC strengthen their position on Genre drama with the new ‘revision’ of Survivors starting soon on BBC 1, following in the footsteps of their genre dramas such as Doctor Who, Robin Hood, Merlin and BoneKickers.

Written and produced by Adrian Hodges (Primeaval), this six part drama series focuses on the world in the aftermath of a devastating virus which wipes out most of the world’s population.

Kate Harwood BBC head of Drama Series says
“Survivors is an exciting new drama series which asks the most fundamental of questions. How would the human spirit endure when faced with the most exciting and terrifying adventures?

“We have managed to assemble a magnificent cast in a series set to take audiences on an emotional roller coaster ride.”

Viewers will have the chance to catch up on every episode of Survivors at any time during the series, using the new series stacking function on BBC iPlayer. Rather than individual episodes only being available for seven days, series stacking means viewers will be able to enjoy any episode, after it has first been broadcast, for the duration of the entire series.

The original Terry Nation TV series of The Survivors was launched in April 1975 on BBC One, Survivors ran for 38?episodes over three series.