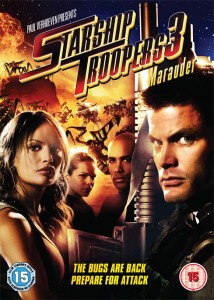 Casper Van Dien reprises his role as the fearless Johnny Rico from the original Starship Troopers in this, the second sequel of the hugely popular sci-fi movie based on the rather politically centered novel by Robert A. Heinlein. Starship Troopers 3: Marauder sees the swarming aliens affectionately referred to as bugs are back, once again wreaking havoc on humanity in this action-packed adventure also starring JOLENE BLALOCK (TV?s Star Trek: Enterprise and Stargate SG-1), AMANDA DONOHOE (LA Law), and CATHERINE OXENBERG (Dynasty). Written and directed by ED NEUMEIER, who has previously written and co-produced the original Starship Troopers.

Johnny Rico (Van Dien) faces off against the murderous bugs once more as he leads his team on a secret mission to rescue a crew of troopers stranded on the remote planet of OM-1. Battling bugs both new and old, the team?s new ?Marauder? weapons technology may be their only hope against a treasonous element operating within the Federation itself. As Captain Lola Beck (Blalock) and the rest of the crew fight to survive in harsh conditions, it begins to dawn on them that something on OM-1 is very, very wrong ? and this time the bugs have a secret weapon that could destroy humanity?