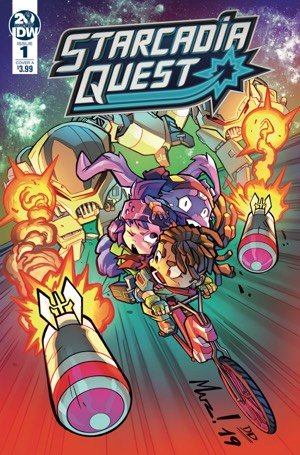 CMON’s highly-anticipated tabletop game (and Kickstarter darling) Starcadia Quest will come to comics beginning in August, courtesy of IDW Publishing. The first-ever expansion of the Starcadia universe, this three-issue miniseries welcomes James Roberts – the fan-favorite and critically acclaimed writer of Transformers: More Than Meets The Eye andLost Light – to craft a wild new adventure for Starkid and his Freelance Adventuring Crew.Illustrated by Aurelio Mazzara (Skylanders) and colored by David García Cruz, Starcadia Quest takes comic readers and game fans deep into the Frontier, where the toughest jobs in the galaxy are handled by Freelance Adventuring Crews. On his sixteenth birthday, the delivery boy known as Starkid sends out a call for the best recruits he can get… at his local Stardollars coffee shop. An action-packed and hilarious QWST begins!

As a special bonus, each issue of Starcadia Quest will be jam-packed with additional pages’ worth of exclusive playable content, allowing readers to incorporate the issue’s story elements into their tabletop gameplay!