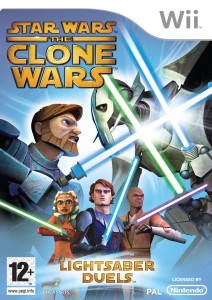 This is the game I was waiting for, the one that I actually NEEDED ever since I heard about the motion sensing wii remote, a fantastic LightSabre game where I can jump around the living room like a ninny swishing around the piece of electronic packed white plastic killing Sith (and Jedi if I was in that kind of mood).

Well I got the game and did it (hurting my shoulder in the process, just be a little wary about getting carried away kids). And I am now a master Jedi.

The game itself is cool, the idea is basic, (it is a 2 player fighting game using Lightsabres and force powers) and the game play is involving but it is best played with a friend I feel as it definitely adds to the experience.

Unfortunately (for me) it is just a duel game, following the characters and locations features in the Star Wars Clone Wars movie. I would have wanted a little bit more that the linear narrative. A grand theft auto style game, ru

nning around using the nunchuck, whilst lightsabre in the other hand (switchable for a blaster) would have made this game more to my liking. But the 2 person battle game has a rich history and this will still appeal to many past its initial novelty value.

A couple of problems I was having though, these were to do with the controllers.

I was using the wrist strap ? THIS IS ESSENTIAL. Otherwise your remote will be sailing through the window glass or smashing your mums best vase.

I was also using the silicone grip, which the remote sis start to slip through when swung a little too violently. I also had a habbit of hitting the home button on the wii remote, but this may be due to the fact I am all thumbs and didn’t have enough play time.

You will probably avoid all these problems though by playing in a sensible manner and not getting too excited.

Overall If you love Star Wars and have wasted many hours playing Tekken 2 on the PSX (or whatever it is the kids are playing now a days) you will love this game.