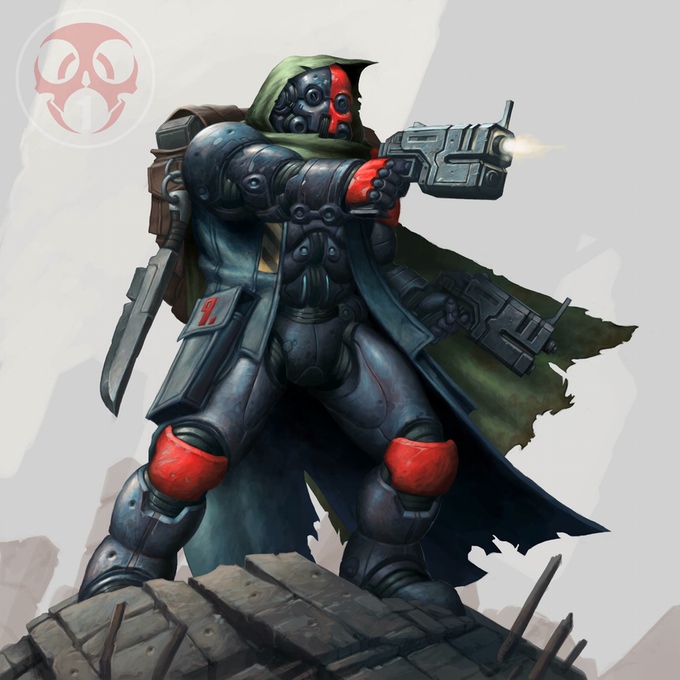 The SLA Industries Skirmish Game has been many years in the making, so first a little history.

Way back in 1993 Scottish company Nightfall Games released SLA Industries a science fiction/horror table top RPG. Dice and books not a computer in sight. SLA Industries (SLA pronounced SLAY) is a very British antidote to the slick and angsty settings that were popular at the time. Set in The World Of Progress, the sphere of SLA Industries’ influence in the known universe, players take on the roles of operatives, employees of an all-encompassing company that controls a frightened population with reality TV and violence while a creeping horror claws its way through the edges of reality.

The game has seen renewed popularity recently, as Nightfall Games reclaimed publication, releasing source material as PDFs over the last few years. With the game returning to print in the near future, Nightfall Games partnered with Daruma Productions to produce a line of miniatures (including iconic characters like Halloween Jack and Delia the Destroyer) and a skirmish game to allow more people to enjoy the setting and characters of SLA Industries.

Daruma Productions have already produced a number of miniatures Scavs, Shivers, Carrien and a couple of heroes for the SLA Industries Skirmish Game and the Kickstarter launches the rules!

Rewards for the Kickstarter include the printed rulebook and faction cards.

Check it out here.

What you are funding is the rulebook and faction decks. The book is to be full-colour with all-new illustrations by Dave Allsop, designed by Nightfall Games and written by Daruma Productions with dozens of pages of new background and information by Dave Allsop and Jared Earle, two of the original writers of SLA Industries. Our head of Rules Development is Brad Zalad, a familiar face in the UK tournament scene. He runs a tight ship ruleswise and is keen that SLA Industries: Cannibal Sector 1 is a balance between tight, tournament-ready rules and scenario-driven narrative games.

Along with the gorgeous rulebook, you will be getting faction decks and other goodies depending on your pledge levels, all fresh from the high-quality Daruma Productions facilities, including exclusive bags and shirts.