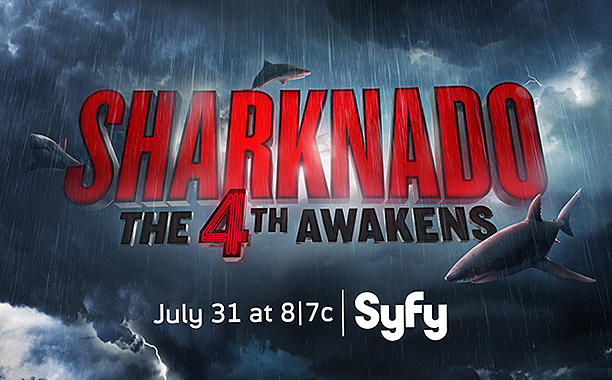 Yes I know it was on the other week. The problem is that I haven’t been able to sum up in words how amazingly bad this carcrash of a movie is.

But that’s the point isn’t it?

Well for the first movie it was, taking the so bad-it’s-good approach to low (ish) budget direct for TV monster movie worked. As it had done for a number of other movies before it from producers The Asylum.

In the first movie they had a tornado filled with sharks in California, the sequel relocated the action but just shifted the background. The third opted for a theme park. Aside from the space stuff in the third, they all essentially had the ending, which I won’t give away here.

With this fourth movie in the windy shark filled movie series it makes me thing that the producers just full on panicked, I can just imagine that meeting.

Top Studio Executive: “So we have done a tornado full of sharks 3 times before, all the films have made money so we need to keep riding this wave, but even our viewers will get tired of this. What can we do to change it?”

Executive 1: “What about a dust storm full or sharks?”

Executive 2: “What about a fire storm full of sharks?”

Executive 3: “What about an electrical storm full of sharks?”

Executive 4: “What about a radioactive Sharknado?”

Lots of time and drinks later…

Top Studio Executive: “Sod it, there is no way we will be allowed to do another one, just chuck it all in. Also didn’t they just make another terminator movie? Is there a way we can rip that off also?”

Obviously my insider knowledge of the process for this movie is a big fat zero and that was conjecture, should the production team want to fly me over there and show me what really happens there is a contact page on Scifind.com!

Look. I have even refrained from using any images from the program as the PR company for the SyFy channel hadn’t ventured anything forth.

Ok. So I haven’t gone into the plot, simply as there is little tying this together apart from nonsensical set pieces, bad special effects and blatant cameos (many of which I didn’t get being British, but they were obviously being paraded not quite with a sign above their head saying “look who this is”).

In summary Sharknado 4 The Forth Awakens is the worst film of the bunch, but is still strangely compelling, and I will be tuning in for the fifth should it ever be made.