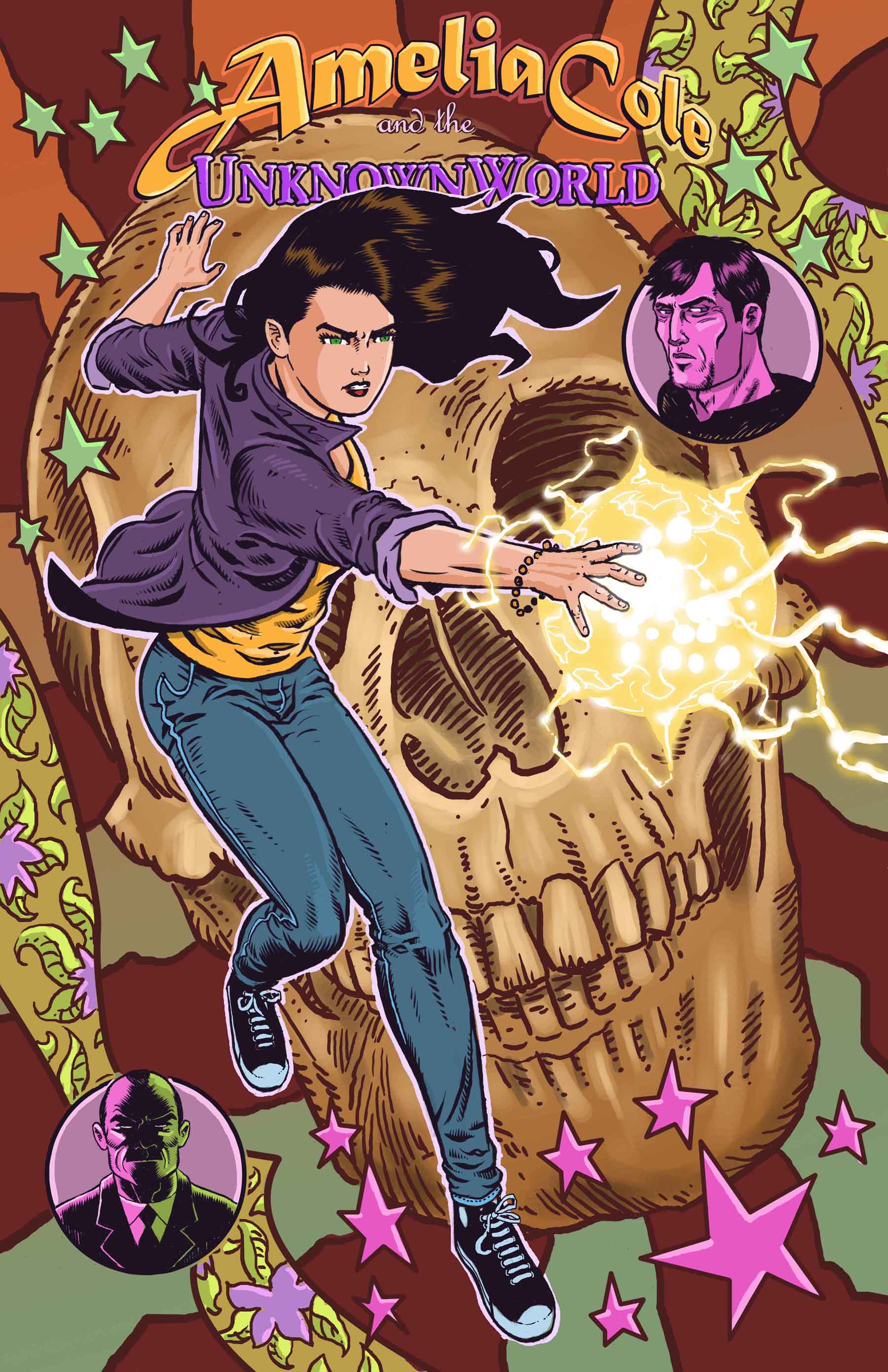 Three titles really stood out for me this year. Amelia Cole and the Unknown World, one of the launch range from Monkeybrain Comics, is the story of a female mage trapped in an alternate dimension, the fight she faces there to protect magic and magic users and that universe’s very odd version of superheroes. Oh and her side kick is an industrial Golem called Lemmy. It’s brilliant, endlessly inventive and witty and one of the best fantasy titles in years. Also, it being a Monkeybrain book, it’s insanely good value. Seriously, their entire range is brilliant but this is a real standout. Go, spend not very much money, be amazed by how many great comics you get.

Hawkeye by Matt Fraction and David Aja also worked miracles this year. Bravely choosing to swim upstream from the mournful, serious archer we saw Jeremy Renner do so well as in Avengers Assemble, they recast Clint as a perpetually battered, down on his luck, man of the people. He’s scruffy and charming and completely without any luck at all, and also a profoundly decent human being. The first issue is tied for the best single comic I read this year, as we see Clint explain how he ended up owning his apartment building and gaining a dog in a sequence that honestly got me teary. Just fun, smart storytelling of the first order.

It’s competition for best single issue I read this year is Captain Marvel issue 1 written by Kelly Sue DeConnick and with art by Dexter Soy. Kelly Sue and Matt are married, and the sheer level of comic writing talent in that house may be enough to bend space and time. Or at the very least ensure they have the best collection of action figures on the block. Finally graduating Carol Danvers from the dismal ‘Ann Coulter in high end dominatrix gear costume’ character that she’s been for so long, Kelly Sue simultaneously grounds Carol Danvers with a series of smart, naturalistic friendships and lets her fly. She’s a pilot, a woman who has dreamed of flying her whole life and the first issue, and first storyline, both focus on Carol dealing with the death of her mentor, a female pilot with a charmingly dubious past. The entire story is great, taking in time travel, rogue alien technology and a group of female pilots in World War II but the first issue is the one that hit me right between the eyes. I lost a family member, who I only got close to this year, in 2012 and her relationship with my girlfriend was very similar to Carol’s friendship with Helen here. The funeral, and the moment where Carol not only decides what to do but takes her friend’s ashes on one last flight hit me where I live. It’s a great series, featuring a character finally living up to her potential and I’m delighted it’s proving a success.

Honorable mentions: The entire Monkeybrain comics line up. Seriously it’s that damn good. Also Mass Effect: Homeworlds for its highly impressive use of established continuity to tell new, personal stories about four of the series’ best characters. The Garrus issue alone is worth the price of admission. Finally, Doctor Who: The Child of Time, coelcting the first chunk of 11th Doctor stories from Doctor Who Magazine, can stand not only as one of the best Who comic stories, but as one of the best Who stories of recent years.

Avengers Assemble literally did seven impossible things before breakfast, managing to give everyone a moment in the sun whilst telling a coherent, fun story and changing the grammar of the modern action movie forever. Don’t believe me? Name a single movie that dealt with that scale of action, and that amount of characters, in that disparate number of locations, a tenth as well prior to to its release. You can’t, because no one has done this before. Seriously, watch for action movies in 2013 to seriously step their game up because Whedon, a man who has one theatrical movie to his name, and a commercial flop at that (No one but you saw it, Browncoats. NO ONE. Doesn’t mean the movie isn’t great, because it is, just means it was a commercial flop) has run rings around every major action director, his second time out of the gate. Awesome work. Also, Coulson lives.

The Dark Knight Rises also proved massively impressive this year. . The conclusion to Nolan’s trilogy absolutely nailed it for me, making a cinematic Catwoman interesting again, redeeming Bane forever from the catastrophe he was in Batman and Robin and delivering a story that felt like all the consequences of the previous movies coming home to roost. There’s a palpable sense of danger to the movie and, as someone who watches movies professionally, it got me over and over, especially the glorious reveal in the closing minutes. Yes, at least one element of the ending is predictable but it doesn’t matter. In the end, this is a story about stories, about the space Batman creates and leaves behind him, I loved it.

And to complete the trifecta of predictability, The Cabin in the Woods. Horror cinema hasn’t had a Doctor Strangelove moment since Scream and it’s been more than overdue one. Whedon and Drew Goddard delivered in absolute spades, and the film manages to work in three separate genres at once; it’s a great ‘teens have sex in the woods and die’ horror movie, a better parody and commentary on ‘teens have sex in the woods and die’ horror movies. It’s third genre is dependent on the viewer but for me, this is one of the best Lovecraftian mythos movies ever made. Savagely funny, brutally clever and framed by staggeringly great performances by Richard Jenkins and Bradley Whitford, this is a horror movie that doesn’t change the game, it ends it. Like Avengers Assemble, I’ll be fascinated to see how people respond to it.

Honorable Mentions: Chronicle combined found footage with superheroic angst to fiercely great effect, whilst Skyfall managed to return Bond to his roots whilst still pointing him at the future. The sequence at the Commons Select Committee, with the kill team en route to M and back up far too far away, is stunning, as is the wonderfully nasty closing fight.

Fringe has been fun for years but it’s final season is extraordinary. With the Observers in full control of Earth and Walter’s decades-long plan as scattered as Walter’s memory, the show has gone all in for it’s final season. There’s a palpable sense of tragedy to much of it as characters we’ve known and loved are reintroduced and, frequently, killed, and the world itself feels run down, shabby and utterly real. The Observers may be in control, but it’s a soft apocalypse for most people and that makes it all the more horrifying, the collaborators proving to be a far more unsettling and disturbing idea than even the Observers themselves. Simultaneously old fashioned, recalling John Carpenter at his best, and entirely new, it’s a magnificent season that looks set to round out a magnificent run.

I am one of the six people on the planet who loved Last Resort and I don’t care. A pseudo-dystopian thriller about a US nuclear submarine ordered to fire on Pakistan and refusing to do so, it’s a fascinating look not only at the perception of the military mindset, but the sort of polite, passive aggressive coup that’s so common in UK spy-fi (I am going to hell for that word I just know it) and so derided in the US. Endlessly grim, inventive and smart and with the likes of Andre Braugher and Robert Patrick front and centre it’s a wild-eyed, very smart and utterly cynical TV show. The US hated it. It’s one of the best things I’ve seen in years.

Finally, on this side of the pond, The Secret of Crickley Hall proved two things; firstly that the BBC still have a dismal amount of genre fiction output, with literally nothing on the table once you step outside the Doctor Who and secondly that if you put a good writer and director and a good cast on a good source novel, strangely, you get good TV. It’s a tightly plotted, smart three hours that unfolds across two time periods at once and is crammed full of neat twists on old ghost story tropes. It’s also crammed full of brilliant performances, especially Suranne Jones and Tom Ellis as the bereaved central couple. It’s an intensely traditional story but it’s so well done, and so moving, especially in the last ten minutes, that it really doesn’t matter. Just a beautifully crafted story, told very well.

Honorable Mentions: Being Human and Misfits both fought through complete cast overhauls and emerged stronger for it, especially Being Human. Elementary also proved to be several dozen times more fun than it had any right to be whilst Arrow, so far, has been two shows; a fascinating Nolan-esque take on being a vigilante and a lumpen-paced, guest-star laden WASP soap. I hope the first wins, it’s much more interesting.

John Scalzi’s Redshirts is brilliant, there’s no other word that covers it. Initially a very funny parody of old-school Star Trek, with a group of characters realizing that they’re the disposable crew members it soon becomes something far deeper. It’s a fantastic comedy, don’t get me wrong, but the closing third of the book is one of the sweetest things you’ll read all year. It’s a story about stories, and why when it comes down to it, they’re magical. I loved it.

The Strugatksy Brothers’ Roadside Picnic was reissued in a new translation this year and again I loved it. It’s the novel that inspired both the Tarkovsky movie and the Stalker series of computer games, and is unrelentingly bleak. Following Red, a Stalker or smuggler who breaks into areas where aliens visited Earth to extract alien tech for money, it’s difficult, bleak and absolutely essential reading.

Honorable Mentions: 2012 has been a great year for small press, with Anachron Press turning out fantastic novels, especially The Red Knight by KT Davies, and Fox Spirit launching with two fantastic anthologies, Tales from the Nun and Dragon and Weird Noir.