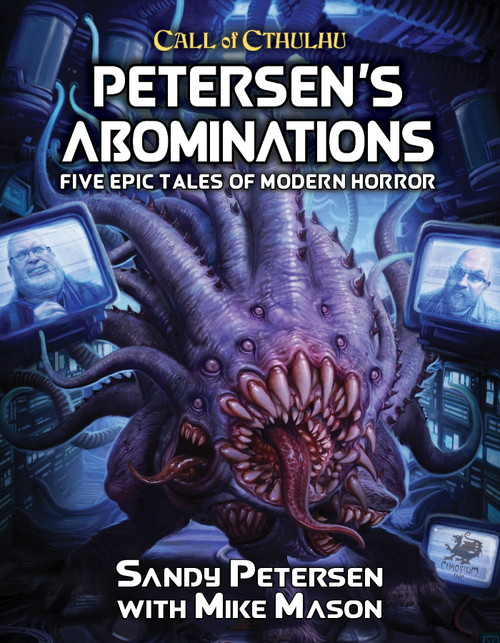 The father of the The Call Of Cthulhu RPG speaks about the origins and his new plans for the game.

“I designed the Call of Cthulhu roleplaying game in 1980, and it changed my life”, said Sandy Petersen. “Though I’ve worked on fabulously successful computer games (e.g. Age of Empires), when I’m invited to gaming conventions as a guest, it’s always on the strength of my tabletop Lovecraftian games. That’s where the love comes from.”

Chaosium has released a new anthology of scenarios for the Call of Cthulhu roleplaying game by its creator, game design legend Sandy Petersen.

Petersen’s Abominations features five such adventures, all set in the modern day – ‘Panacea’, ‘Hotel Hell’, ‘Mohole’, ‘The Derelict’, and ‘Voice on the Phone’. Each comes with a set of ready to play pre-generated investigators, allowing players to dive straight into the mysteries within.

As these scenarios were originally only intended for Sandy’s own use—often with a major part of the adventure “inside my skull and not actually written down”—he brought award-winning RPG writer Mike Mason on board to help prepare them for publication. As Chaosium’s Call of Cthulhu line editor and co-author of the most current edition of the rules, Mike was particularly well-placed to help bring Sandy’s twisted imaginings to print.

“Mike took my wooly notes and turned them into tightly-plotted masterpieces”, said Sandy. “We worked together on this, talking for hours to work out details and ensure everything went well. Mike would write up the adventure from my outline (and sometimes more detailed material), and I would edit it. Most of the adventures in this book went through several revisions before we were both satisfied.”

Each one-shot scenario is designed for one or more sessions of play. Advice for getting the most out of the scenarios is provided, as well as suggestions for expanding the scope of the adventures or making them part of a campaign. And this is but the first such collaboration of its kind: there are more “Tales of Sandy Petersen” yet to be unleashed!