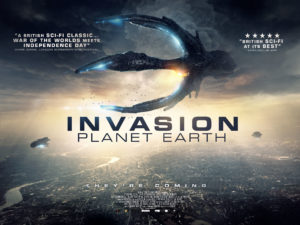 We’ve all seen films about aliens invading the earth; Alien, Independence Day and the Men In Black series to name a few. They often portray an alien attack, and end with the protagonist saving the world from the evil forces. But Simon Cox’s latest film challenges these classic alien stereotypes.

Thomas Dunn is a doctor with the weight of the world on his shoulders. Between coping with the death of his daughter and his strained relationship with his brother Freddy, hope of a balanced life seems far away. It starts with a flashback, showing Tom’s seemingly insignificant childhood obsession with fictional character ‘Kaleidoscope Man’, and his positive relationship (at the time) with his father and brother.

This film was a 50/50 in terms of jumping on the bandwagon of typical science fiction plot points, the uninvited visitors causing major irreparable damage to our planet and abducting the main characters but yet it wasn’t for the intentions of a global takeover like the films mentioned above.

It takes an interesting approach to the idea of an invasion, with many plot twists that certainly kept me on my toes. How they foreshadowed the coming events was clever, they used explosions and simple negative image effects (very foreboding). What the film lacked sfx, it made up for with the quality of acting and the plotline. Throughout the story the character development, even if it seems a bit too fast, is well explained and completely necessary to the plotline.

One thing that really amazed me though was the lack of budget, yet they made a film that would be well received by a modern cinematic audience. The slight lack of realistic sfx and vfx in the spaceship adds to the nostalgia coming across from the flashbacks of Kaleidoscope man who represents the 80’s science fiction world.

I hope a sequel or another project is in the works, it is worthy of a proper fanbase and I wouldn’t be surprised if does develop a dedicated following.