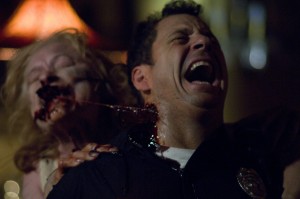 Quarantine is a zombiesq ‘camera point of view’ (like Blair Witch, Cloverfield, Diary Of The Dead etc) horror movie coming out soon in the UK

Television reporter Angela Vidal (Jennifer Carpenter) and her cameraman (Steve Harris) are assigned to spend the night shift with a Los Angeles Fire Station. After a routine 911 call takes them to a small apartment building, they find police officers already on the scene in response to blood curdling screams coming from one of the apartment units.

They soon learn that a woman living in the building has been infected by something unknown. After a few of the residents are viciously attacked, they try to escape with the news crew in tow, only to find that the CDC has quarantined the building. Phones, internet, televisions and cell phone access have been cut-off, and officials are not relaying information to those locked inside. When the quarantine is finally lifted, the only evidence of what took place is the news crew?s videotape.

Quarantine is being released November 14th through Sony Pictures.

Trailer below is ‘red band trailer‘ – you have been warned….