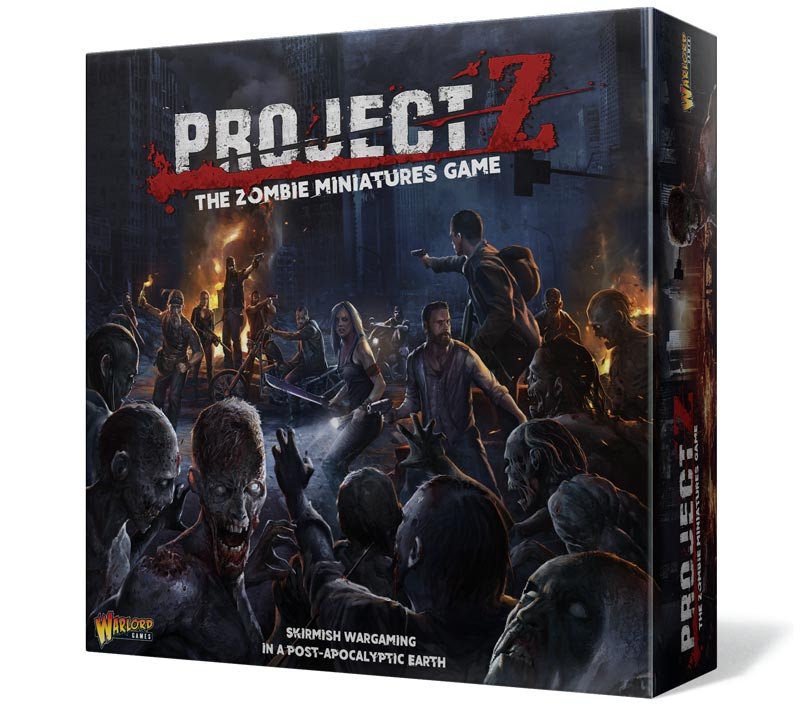 In Project Z you fight to survive in the abandoned streets of a post-apocalyptic world infested by unnatural creatures hungry for your flesh. Scavenge for scarce supplies whilst battling against the dead and the living alike; there are no laws, there are no rules, only the fight.

Project Z is a skirmish wargame from Warlord Games. In this game 1 to 3 players take control of Survivors or a Street Gang fighting to survive against the environment and an ever-growing horde of Zombies. Project Z is a fast and easy to learn game containing 39 detailed self-assembly plastic models, rules, counters and specially designed dice and cards.

The game is best played on a smaller 2-3 foot table, so is great for those who would love to play a regular skirmish game but are restricted on space. Project Z will play nicely on a kitchen table.

Yes the miniatures require assembly, but in about 20 minutes of opening the core Project Z Box you are ready to start playing.

Extensive use of cards and measurement templates means that the game is quick to learn and very rewarding very quickly.

The miniatures are not exactly starter, and you do get to assemble heads, arms, weapons etc to the models which means you have a lot of control over the look of the model on the table. Painting is optional – but a very good next step for those moving from board games to more freeform world of skirmish and war games.

But the big questions is: How Many Zombies Do I Get?

Well in the core starter box you get 23 zombies, 10 survivors and 6 biker gang models. Some of the figures are clearly influenced by certain TV Shows and Movies.

There are a number of add on boxes available for Project Z at the time of writing.

From the tiny little girl with an Uzi to the tennis racket wielding sports player, these survivors add character to the games and bring out the fun.

This expansion set contains enough parts to make 6 highly detailed plastic gangers including 2 bikes plus this stunning Gang Leader model with pillion rider. For Images and to buy from Element Games click here

You can buy Wargames from Element Games. We do get a commission.