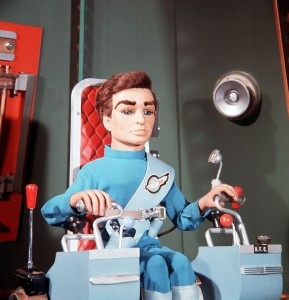 Gerry Anderson’s Thunderbirds was originally written, produced and filmed at SEGRO’s Slough Trading Estate between 1964 and 1966. Now as part of the show’s 50th anniversary celebrations the Thunderbirds team has returned to its original home to produce three new episodes. A project created by Stephen La Riviere and supported by ITV, Sylvia Anderson, and the Gerry Anderson estate as represented by his son Jamie Anderson.

The project makes use of audio recordings first released in 1966 which featured the series’ original voice cast as well as contemporary music and sound effects. Thunderbirds 1965 will see La Rivière and company film faithfully recreated puppets and sets using all of the classic Supermarionation techniques, and combine this with the original audio recordings to create three brand new video episodes in the distinctive Thunderbirds style.

“Technology has moved on in five decades, but our goal is to produce an unashamedly retro episode made with many of the same Supermarionation techniques used to bring the puppets and models to life in the 1960s. So in my mind it made sense to return to the show’s original home in Slough to inspire us in the same way it did the original production team.

“To achieve our goals we started a Kickstarter fund, Thunderbirds1965, to allow us to raise the money for this anniversary project. Anyone who contributes to the fund has a unique opportunity to be part of the project and receive specially created Thunderbirds merchandise, from being inducted into the Thunderbirds Hall of Fame to receiving a limited edition DVD of the finished episodes.

“The raising of the money we needed to make the first three new episodes of Thunderbirds for 49 years has proved very popular and we are now three quarters of the way towards raising all the money we need.”

“Knowing that Thunderbirds will return to the Slough Trading estate – its spiritual home – fills me with pride, and I cannot wait to see these new episodes being shot on Stirling Road, which was the site of the original studio building where the classic series was filmed.”

The special anniversary production will be made by the team behind Filmed in Supermarionation – the critically acclaimed documentary about Thunderbirds released last year.
Paul Lewis, SEGRO’s Regional Director for the Thames Valley, said:

“It is really exciting to welcome Thunderbirds back to their original home and to be able to help them celebrate their 50th anniversary. Thunderbirds is a British brand that is known worldwide and which produced all its original shows from our Slough Trading Estate.

“We pride ourselves on working closely with our customers and to understand their business aspirations so we were very happy not only to be able to give a home to this exciting project but to re-engage with an historic client.

“This is also another great example to showcase the huge range of activities that go on inside our industrial buildings.”

SEGRO owns and manages the equivalent to 801 football pitches – over 60 million sq ft of industrial property with a third located in London and the South East. Its portfolio is made up of modern industrial units of every shape and size and are all favourably located close to transport networks.

Home to over 800 customers, the variety of activity that goes on inside SEGRO’s units range from manufacturing to chocolate making to high tech R&D and pharma.

To become involved in the Thunderbirds1965 Kickstarter project visit https://www.kickstarter.com/projects/1558089494/thunderbirds-1965-new-episodes-from-1960s-recordin