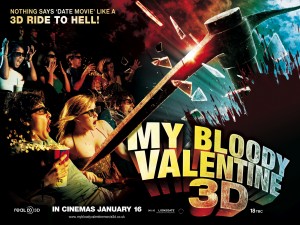 I must admit I loathe the word ‘reimagining’ with respect to TV shows and movies. Usually means rehashing old crap with a young(er) cast and even when the original material is good it just ends up getting the backs up of people who liked the original. With this in mind I dreaded seeing My Bloody Valentine 3-D. I also dreaded seeing the movie because of those 2 characters ‘3’ and ‘D’. Previous 3D horror movies have just been a gimmick in an otherwise dying franchise.

I spent the whole first sequence thinking that this was going to be a lame gore fest and have lots of things jumping at the audience, pick axes, explosions etc. And indeed the first high impact big sequence ticked these boxes, fun but completely unchallenging. Set me to think that the rest of the movie would be a pile of ‘fun dross’.

I was quite presently surprised. Yes the movie was a slasher film and yes there were some by the numbers sequences, but there did come a degree of murder mystery and involvement in the story and characters. In fact I hasten to say that this is possibly the best mainstream slasher film to hit the cinema since SCREAM. Note I use the word mainstream, there have been some fantastic never seen horror movies, checkout horrorshare if you want to be kept up to date on this low budget horror scene.

The best thing was that the 3D action didn’t make the movie ? it was just a pleasant bonus. Hinging the movie on a gimmick like that alone may have seemed a good idea, but would not have worked if that were the only thing holding the picture together.