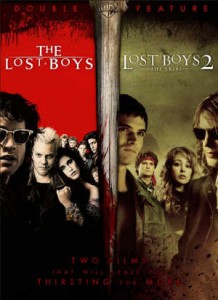 I have been waiting for this for a while now, I did hope for a cinema release as Lost Boys was one of my favourite 80’s coming of age vampire movies. But any release for Lost Boys 2: The Tribe is better than none, and yes it is direct to DVD – but I am not worried, it is destined to be quality vampire fun.

The Lost Boys, If you don’t know the plot of the Lost Boys shame on you, get down to the video store or amazon now and rent/buy it. You should know that The Lost Boys remains today as one of the most popular and iconic feature films ever made transforming the humble vampire into a swaggering cult phenomenon – both on the big and small screens. Where would Buffy, Charmed and Supernatural be without the brothers Frog? And this all new chapter of the cult classic – Lost Boys 2: The Tribe will continue to enthrall fans both old and new. The film, which is directed by P.J. Pesce from a script by Hans Rodionoff, brings Corey Feldman and Corey Haim back together on screen for the first time in 20 years. (Passing Strangers) keeping things in the family and following in his famous half brother?s footsteps by playing the part of a vampire. The film also stars Tad Hilgenbrinck (American Pie: Band Camp) as Chris Emerson and Autumn Reeser (The O.C.) as Nicole Emerson.

A wonderful homage to The Lost Boys legend, Lost Boys 2: The Tribe sets a sinister tone of impending doom that fans will find irresistible as they follow the story of a brother and sister who move to a sleepy surf town in California, only to get mixed up with a gang of surfers and extreme sports junkies that are more than they appear to be.

Lost Boys 2: The Tribe also features a remake of the iconic The Lost Boys song ?Cry Little Sister? by G Tom Mac. (Which I think may be a bad idea – I never like remixes – well with some exceptions) The updated version of the classic song is performed by the post-hardcore band Aiden. The up-and-coming band Canadian band ?Yeah Whatever? also have a cameo in the film.

Released as a celebratory 2 disc set with the original film, you couldn?t hope for a more enticing fright fest of gore.

The sequel to the 1987 cult hit The Lost Boys takes us to the shady surf city of Luna Bay, California, where vampires quickly dispatch anyone who crosses their path. Into this dark world arrive Chris Emerson and his younger sister, Nicole. Having just lost their parents (their father is Michael Emerson, Jason Patric in the original Lost Boys) in a car accident, the siblings move in with their eccentric Aunt Jillian and become new prey for the locals? way of life. When Nicole unwittingly falls for a local vampire, Chris must locate and destroy the gang?s lifeline before his sisters transformation is complete. To do this Chris finds himself relying on the expertise of none other than Edgar Frog (Corey Feldman) and Sam Emerson (Corey Haim).

Three Yeah Whatever videos: Downfall, Hell is Full and It?s Over Now