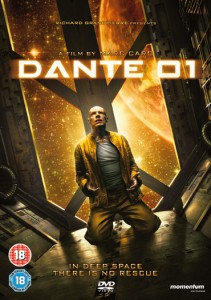 DANTE 01, the spine chilling futuristic sci-fi horror, following the induction of a new prisoner into a deep space psychiatric prison, will be released on DVD Monday 15th September 2008.

Sole survivor of an alien encounter, Saint Georges (Lambert Wilson ? Sahara and The Matrix franchise) is charged with the murder of his entire crew and sentenced to a life of medical trials onboard Dante 01 ? one of the first psychiatric space prisons.

Upon meeting Saint Georges, fellow inmates (Dominique Pinon – Amelie) soon discover all is not normal with the new prisoner as he begins to display mysterious powers stemming from his alien experience. As his strange abilities begin to emerge, discontent begins to brew onboard Dante 01, as a blood thirsty power struggle starts amongst jealous prisoners.

As jailors and inmates alike try to fathom Saint Georges? god-like abilities, paranoia sets in, resulting in the ships computer being sabotaged, sending the space prison plummeting towards a fireball planet. All seems lost as the inhabitants begin to realise how secluded they are and ?in deep space, there is no rescue?.

Dante 01 is the intriguing and long awaited solo debut from legendry co-creator of The City of Lost Children and Delicatessen, Marc Caro and also stars Linh Dan Pham (The beat that my heart skipped).

DVD Release is out 15th September.