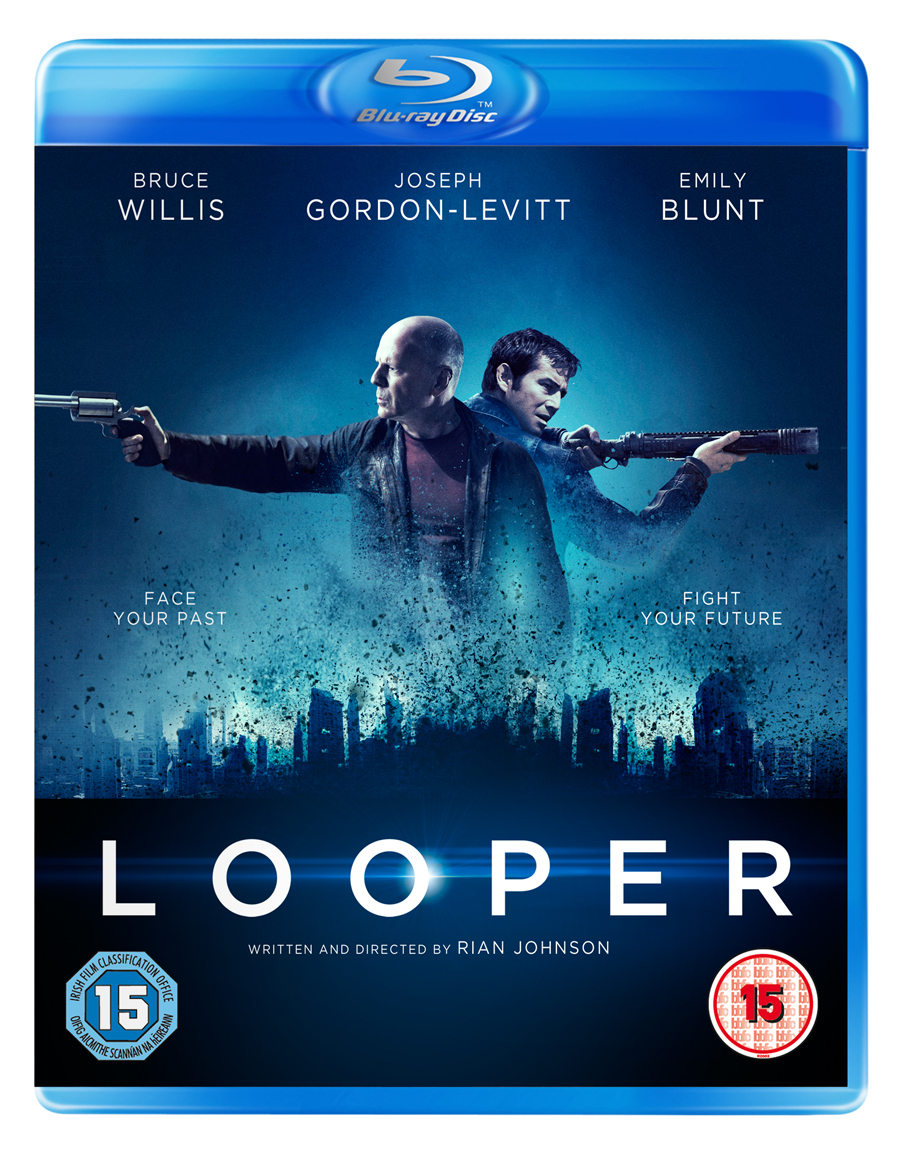 Looper arrives on Blu-ray and DVD on 28th January 2013 (in the UK) covered in countless 5-star reviews and glowing superlative-heavy review quotes. Starring Bruce Willis, Joseph Gordon-Levitt and Emily Blunt, and directed by Rian Johnson, it is a time-travel action thriller mystery something-or-other that is both genuinely original in places, and stultifyingly dull in others. Let’s consider the plot:

“In the year 2044 time travel has not yet been invented. But in 30 years it will have been…” (there’s some Hitch-hiker’s Guide time-travel grammar for you to grapple with!). Joe (played by actor-of-the-moment Joseph Gordon-Levitt) is a Looper in 2044, a man whose job is to wait for people to be sent back in time by crime bosses, and to shoot them dead. Apparently in the future it is impossible to dispose of people/bodies hence the crime bosses using time travel to send the poor mooks back in time to be offed. This all goes swimmingly well until a Looper is sent his future self to kill, with an appropriate retirement bonus, of course. When Joe’s future self is sent back everything goes awry, with future Joe (a grizzled but still on-form Willis) doing a runner and on the hunt for a child who will grow up to be…well, let’s not ruin too much of the plot. Suffice to say Joe has to try to hunt down future Joe, while being hunted himself by his own crime boss for reasons which are never really made all that clear.

So that is the film in a few sentences. It is quite hard to review the film without spoiling it for others, not because any of the twists are all that unexpected or original, but just because there is an actual pleasure to watching the film and working it out as you go (usually about 20 minutes before the director reveals the twist). Looper is an eminently enjoyable film, a nice balance between traditional thriller and SF spectacle. The world-building is handled well, albeit without recourse to explanation. 2044 is a violent dystopia, a perfect backdrop to the Looper activity. We learn little about why it is how it is, and even less about what occurs in the 30 years that follow. But this works, lending some mystery to the world we watch, while allowing us to accept the random and very public violence on display.

The time-travel mechanic feels as though it makes sense, a clever idea (if a tad similar to Timecop) which is at the heart of the story but never used as a deus ex machine…there is time travel, accept it! Admittedly the return of future Joe to 2044 and his subsequent actions do set up any number of paradoxes which may or may not hold up to scrutiny, and by the end of the film enquiring minds will be screaming out for someone to explain just how one paradox can lead to a logical conclusion while all the others are seemingly overlooked. But then, this is a movie, not reality and so story comes before mathematics, probably!

Looper has been hailed “The Most Exciting Film of the Year” (Shortlist) and given 5 stars by Empire, Total Film, SFX and FHM…but is it? OK, it certainly doesn’t disappoint in the same way as Amazing Spiderman or The Dark Knight Rises, but it is far from the most exciting film of the year. I suggest these reviewers expand their horizons to the Far East where, in 2012 alone, there were numerous movies made that outstrip Looper in the excitement stakes. This isn’t to say that Looper isn’t exciting, far from it. For approximately half the film’s running time there is plenty of excitement, fights, chases, guns, night-clubs and prostitutes. It is all very thrilling in a sub-Bladerunner style. Everyone is very tightly-wound, yet the film doesn’t come across as overly dark or angst-ridden. But half way through it comes to a resounding halt as we are offered some time to reflect on the timey-whimeyness of the plot, the intense emotional impact of the character’s individual stories and experiences, and watch as the director and writer cleverly place their pieces in preparation for the third-reel action-fest! JUST GET ON WITH IT!

Away from the interminable dullness of the middle of the film the director does good things with his characters, all of whom feel hyper-real but grounded. There is some very good casting of secondary parts here. Which is good, because they couldn’t have got a more wooden leading man if they’d tried? I apologise to the rest of the world, all of whom seem to think Joseph Gordon-Levitt is the next coming of the acting messiah, but I find the guy dull, flat, lifeless and one-note. His face is almost, but not quite, as frozen in place as Kristen Stewart’s. Throughout Looper he plays a perpetual mannequin. I suppose he is ‘acting’ dispassionate, detached, high on the eye-drop drugs his character takes constantly. Fine, great, wonderful. But it gives us one of the least-likeable leading characters in recent history. I just didn’t care about him or his plight. When, later in the film he takes refuge on a farm run by Emily Blunt’s character, he has the opportunity to bring the role to life with empathy and warmth, but the fact is he remains as stolid and wooden as ever. It doesn’t help that he is out-acted by a 10 year old (the stand-out actor in the film in my opinion). Now, to be fair to Levitt, he is supposed to be a younger Bruce Willis, and Willis’ future Joe is, well, Bruce Willis in grizzled action-hero mode. Yes, it is the Willis we all know, the stoney-faced, slightly laconic, wry and world-weary veteran pulled back in for one more go on the merry-go-round. Great stuff, it is what we love about ol’ stoney face (oooh, Willis as Dredd…it could have worked, you know?!) But where Willis pulls off subtle facial expressions and his eyebrows out-act two-thirds of Hollywood’s leading men, Levitt just looks plastic, frozen, botoxed to within an inch of his life. But then I didn’t see why he was considered the standout talent in Inception either. Maybe my Joseph Gordon-Levitt filter has been pre-set too high?

Emily Blunt does an admirable job playing the “seen it a thousand times before” grizzled, world weary single mother farmer with weird young kid. You can see her arc a mile away, but she plays it well and offers a well-rounded performance. Looper also offers us another chance to enjoy Jeff Daniels playing slightly off-kilter, loopy dangerous bad guy. It is always a pleasure to see Daniels in these more off-beat roles. He is counter-culture in so many ways, so seeing him playing against type is great, and of course, he does it with style and subtlety…a truly frightening bad guy.

The stand-out performance in the film comes from 10 yr old Cid, played by Pierce Gagnon. I can’t say too much without spoiling the film for you, but focus on this kid whenever he is on screen because there are some serious acting chops on display. Guided well, this kid could become a very big thing in acting. I just hope he is given the opportunity to continue with this style of honest, interesting and powerful acting. Believe me, the Cid character could have been played with far less intensity and power by many other child actors, congratulations to Rian Johnson for choosing Pierce and allowing him to perform the role this way.

So, all that said, is Looper worth your time and money? It certainly isn’t the messiah of movies from 2012, and is definitely isn’t the most exciting film of the year by a long chalk. But it IS a good film, it does dabble in time travel mysteries in a new and occasionally original way. It offers interesting world-building and tantalising near-future SF. Bruce Willis is good value for money, and young Pierce Gagnon is a brilliant revelation. There are faults and paradoxes, the film falls flat on its face halfway through, and the ending is far less powerful a statement than the film-makers intended. But it is a great example of a director and writer aiming for the stars, and while not quite reaching them, making something entertaining and far-different in tone and style from the big-money Hollywood blockbusters. Looper is a worthy addition to your collection if you value subtle SF-driven thrillers that try to do something new, entertain you and make you think.

The Blu-ray edition which I reviewed looked vibrant and detailed, with only occasional brightness issues. There was a slight issue with the audio mix, like so many recent BD releases, the dialogue in quiet scenes was exceptionally quiet, to be followed by explosively loud action scenes. Fiddling with your audio settings will help fix this (increase front centre and decrease rear speakers) but it is a slight shame the mix couldn’t be a little more balanced. Beyond that it is another great looking and sounding BD. Extras include commentary by the director and stars, featurettes on the making of and composing, deleted scenes, trailers, a science of time travel feature and some additional featurettes. Quite a decent package. Sadly, once again, the release price for the BD is a staggering £24.99 or £25.99 for the pointless steelbook edition. Even the DVD is RRPing at £19.99 – so keep your eyes out for good deals at the likes of Sainsbury’s or Tesco’s because these manufacturer RRPs are outrageously overpriced and not good value for money.