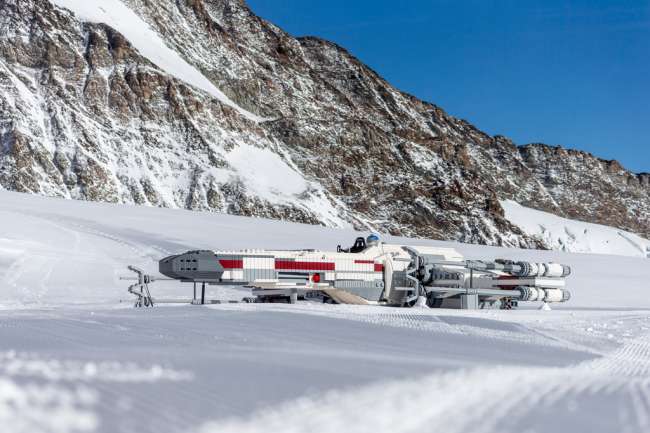 With the landing of the LEGO® Star Wars™ X-Wing™ on the longest glacier of the Alps, LEGO also celebrates a very special partnership: The license agreement signed over 20 years ago between the LEGO® Group and Lucasfilm started an intergalactic success story which has connected people across generations and countries ever since.

The LEGO® Star Wars X-Wing built entirely from 2.5 million LEGO® pieces by LEGO® Certified Professional Georg Schmitt, along with a 10-person team, spans an impressive 10 x 10 metres. The building of the LEGO® Star Wars™ X-Wing™ took over 1,500 hours of work.

GRINDELWALD, SWITZERLAND – OCTOBER 03: A LEGO Star Wars X-Wing Starfighter is build up at the Jungfraujoch ‘Top of Europe’ in Switzerland ahead of “Triple Force Friday” on October 03, 2019, near Grindelwald, Switzerland. The lifesize LEGO Star Wars X-Wing Starfighter is built out of 2,5 million LEGO bricks and has a size of 10 x 10 meter. (Photo by Jan Hetfleisch/Getty Images for the LEGO Group)

Fans can look forward to ten new LEGO® Star Wars™ sets, which are available in shops worldwide from October 4th 2019.  CHECK OUT ON AMAZON. In addition to new LEGO® Star Wars™ products from the film “Star Wars: The Rise of Skywalker”, which is coming to cinemas in in December 2019, there will be a new edition of the Yoda™ bust as well as a new version of the popular Millennium Falcon™, with which young and old can create their own personal adventure on the search for Kylo Ren’s™ shuttle. The story will continue to be written with LEGO® Star Wars™– “The Force is in your hands”!