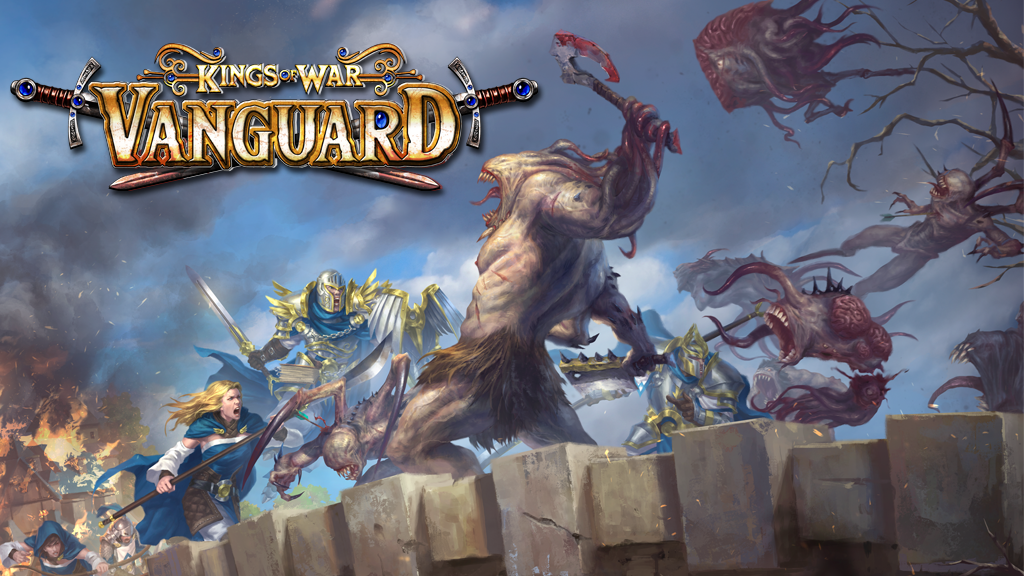 Kings of War: Vanguard is a Skirmish game from Mantic Games (Who make Deadzone, Kings Of War and The Walking Dead Miniatures Games).

Mantic wanted something that would compliment their existing Kings of War range and also provide a starting point for those looking to start their own Kings of War army. (Like Me).

This is a good thing as not everyone has time or space for a sprawling 2-3 hour game of large format combat. A one hour skirmish game is great, played on a smaller area.

The format is looking to be skilled warriors, along with a few supporting troops, rather than the more typical rank and flank.

Skirmishes are also looking to feed into larger games:
“It was also clear how these battles could feed into larger games of Kings of War too. So if you play a game of Vanguard in which the objective is to light beacons to show the way, in Kings of War you’ll be able to deploy your troops in a more advantageous position. Likewise, the scenarios can go the other way too, so you start with a big battle and then play a game of Vanguard in which you loot the corpses. Of course, Vanguard can be played independently of Kings of War and there will be a full campaign mode.” – Rob Burman, Mantic

Mantica is a world ravaged by war, a constant fight for land and resources, or prestige and power. The borders of countries wax and wane like the phases of the moon. The sound of mighty armies marching to war echoes throughout the land.

But wars can be won before the first arrows have been fired, or sword has smashed against sword. Small warbands of hardened warriors clash in desperate struggles to gain the tactical advantage before the battle lines are drawn. These are the bloody skirmishes before the war, where warriors become legends.

Kings of War: Vanguard will be launching on Kickstater soon.

Vanguard will feature character cards that include all the stats you’ll need to play. Each of the heroes, special characters and warriors will come with their own cards, giving players a great reference during the game. When you’re playing a campaign, we’ll also be making a roster sheet, so you can track upgrades/new abilities/xp. NAME – if they’re a named character, this will be their name, e.g. Grekle Cacklemaster, or if they’re a standard miniature it’ll be the name of the unit.
RACE/TYPE – first up you can see what Race the model is. The model’s Race is also a keyword that may interact with other rules, e.g. a unit could receive a bonus when attacking a Race they particularly despise. Next, models will be one (or more) of the following Types: Grunt, Warrior, Support, Command, Spellcaster, and Large. Type is important when building a Warband and, once again, the Type is a keyword that may interact with other rules.
POINTS – this is how many points it costs to add the model to your warband.
STATS – this is where you can find all the stats for the model.
Speed (SP)

This value shows the distance the model can move in inches.

This is the target number the model needs to roll to hit a target when using a Ranged attack, typically as part of a Shoot or Cast action.

This is the target number the model needs to roll to hit an opponent when making a Melee attack.

This is the target number a model needs to roll to avoid taking damage and suffering wounds.

This is the target number for any Nerve tests the model needs to take. This will come into play if the Warband is broken or if something unnerving happens.

This shows the number of wounds the model can suffer before it is removed from play as a casualty. The larger the number, the more resilient (or stupid!) the model is.

The height of a model affects how it interacts with other models and terrain for line of sight and visibility of targets.

5. SPECIAL RULES – here you can see any special rules the model has. Some of these will be similar to those seen in Kings of War, while others will be completely new.

6. POWER DICE – this indicates how many Power Dice the model generates. The Power Dice work a little like the Command Dice in Deadzone and we’ll have a closer look at Power Dice in a future blog.

7. RANGED & MELEE – this shows how many D8s the model rolls during combat. That’s right, we’ll be using D8s for Vanguard, rather than standard D6s. Even better we’ve got exploding D8s during combat to help create some crazy cinematic moments.

8. EQUIPMENT – equipment will play a large part in Vanguard, as warbands uncover and buy new items during a campaign. Some models will come equipped with weapons/items as standard and they’ll be listed here.

9. SPELLS – spellcasters will have their spells listed here. We’ll be expanding the number of spells available, compared to Kings of War. Also, you may notice it says (short) after the spell name. Just like Deadzone, models will be able to perform two short actions or one long action. Some spells will be long actions, while others will be short. What’s more you’ll be able to boost spells to make them more powerful. As spellcasters gain experience in a campaign, they will also get the chance to learn new spells from an advanced spellbook or faction-specific magic.

10. SPECIAL ABILITIES and RULES – if the model has any special abilities they’ll be listed here. Special Abilities use the Power Dice mentioned earlier, so we’ll go into specifics in a future blog. The Dice are as follows red – weakest, white – slightly better and blue –best. These dice come with differing amounts of stars on (up to a maximum of three) to represent the amount of successes rolled.

A Bit About Vanguard Combat

Starting on point 7 of the stat card above.

Once we’d settled on D8s, we deliberated about whether or not the number 8 should ‘explode’ when rolled. Ultimately we decided that the opportunity to go into ‘overdrive’ by rolling 8s fitted nicely with the idea of individuals going all out for victory. It also helped to create those cinematic moments that you’ll end up talking about after games. ‘Remember, that time the goblin took out an Earth Elemental after rolling six 8s?’ It may be extremely unlikely, but all us goblin lovers can dream.

Anyway, going back to the stat card. Firstly you’ll check the range or melee attack stat to see how many D8s you’ll be rolling. Next up, check the ‘Ra’ or ‘Me’ stat for the target number you’ll need to roll. Any successes count as potential hits against your opponent. Finally your opponent rolls the number of dice equal to the potential hits and is trying to equal or exceed the ‘Ar’ statistic. This gives the defending player the opportunity to add some extra dice using any spare Power in order to keep their most valuable units alive!

The defending player can also retaliate against the attack – immediately – cool, as you would wouldn’t you.