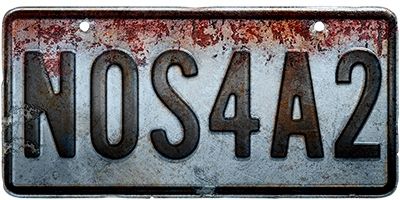 NOS4A2, the hit vampire series based on the bestselling novel by Joe Hill, is coming to Shudder, the premium streaming service dedicated to horror, thriller and the supernatural. Shudder announced today that the first episode of NOS4A2 will debut on their service in the U.S. and Canada on Thursday, August 8, with subsequent episodes of the 10-episode series added every Thursday.

“Showrunner Jami O’Brien and her cast have done an amazing job bringing Joe Hill’s gripping novel to life,” said Shudder GM Craig Engler. “NOS4A2 is one of the best new horror series in years, and we’re beyond thrilled to bring it to Shudder members.”

The series stars Emmy®-nominated actor and producer Zachary Quinto, Ashleigh Cummings, Olafur Darri Olafsson, Virginia Kull, Ebon Moss-Bachrach and Jahkara Smith. NOS4A2 introduces Vic McQueen (Cummings), a gifted young woman who discovers she has a supernatural ability to find lost things. This ability puts her on a collision course with the evil and immortal Charlie Manx (Quinto). Manx is a supernatural villain who feeds off the souls of children then deposits what remains of them into Christmasland – a twisted place of Manx’s imagination where every day is Christmas Day and unhappiness is against the law. Vic strives to defeat Manx and rescue his victims – without losing her mind or falling victim to him herself.

NOS4A2 is produced by AMC Studios in association with Tornante Television. The series is executive produced by Joe Hill, Jami O’Brien (Fear The Walking Dead, Hell On Wheels), who created the show for television and serves as showrunner, and Lauren Corrao, Co-President of Tornante Television. Hill has also contributed a story to Shudder’s upcoming original series Creepshow, premiering later this year.