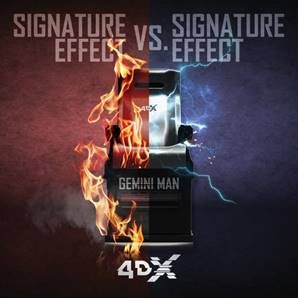 Fans of 4DX and ScreenX will soon be in for a thrilling ride as they are thrown into the motorcycle chases of Gemini Man, and become part of the action of Disney’s Maleficent: Mistress of Evil as the films are released in 4DX and ScreenX exclusively at Cineworld Cinemas throughout the UK and Ireland.

Audiences will be immersed in the visceral action sequences of Gemini Man — guns will crackle, glass will shatter, motorcycle engines will rev up. With ScreenX’s atmospheric viewing experience that surrounds you in your seat, audiences will be taken on a journey with the cast and feel part of the motorcycle riding and chasing scenes. In addition, 4DX’s motion chair and extreme sensory effects such as water, wind, scent and strobe lighting, will make the action scenes feel much more exhilarating. Among Gemini Man’s 35 minutes of spectacular 270° ScreenX scenes, the 8-minute motorcycle action scene is most anticipated by fans.

CJ 4DPLEX is a leading, next-generation cinema technology company, headquartered in Seoul with international offices in Los Angeles and Beijing. The company has created innovative film technologies for theaters worldwide that include ‘4DX’ and ScreenX’ for consumers to experience films in ways that were never before possible. 4DX provides moviegoers with an innovative multi-sensory experience, allowing the audience to connect with movies through motion, vibration, water, wind, snow, lightning, scents, and other special effects that enhance the visuals on-screen. Each 4DX auditorium incorporates motion-based seating synchronized with 21 different effects and optimized by a team of skilled editors, maximizing the excitement of the movie, beyond the limits of audio and video.