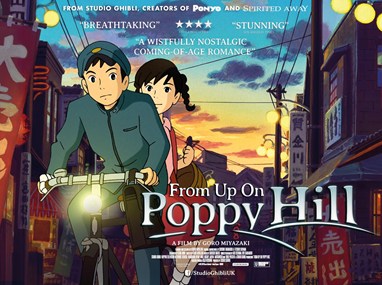 A new film from Studio Ghibli is always an exciting prospect, but this one came with, for me, a certain degree of hesitancy. A post-Korean War slice of reality directed by Goro Miyazaki…could Ghibli deliver their usual magic in a non-fantastical setting, and could Goro-san improve from the utter disappointment that was “Tales From Earthsea”? The simple answer is yes, on both counts. The more complex answer is…well, there really isn’t a more complex answer. “From Up On Poppy Hill” is sublime, wondrous, heart-warming, thrilling, emotional, exhilarating, life-affirming, beautiful and so many other things I could just cut-and-paste a dictionary of positive terms here and be done with it. Out of five stars this is a 10 star film. This is Ghibli at its very best and it was an absolute pleasure to sit in that screening room and experience their stunning tale unfold over and hour and a half.
Written by the legendary Hiyao Miyazaki and Keiko Niwa, and based on the 1980 manga by Tetsuro Sayama & Chizuru Takahashi, the story revolves around Umi Matsuzaki, a 16 year old high schooler in the Port of Yokohama. It is 1963 and she lives in a boarding house with her grandmother and several female residents, looking after their needs every morning and evening, and heading off to school during the daytime. Her mother, a professor, is on an extended trip to the US, and her father was killed during the Korean War. Every morning Umi raises signal flags hoping to reach the spirit of her drowned father. One day, the school newspaper prints a poem about her flags and she heads off to the clubhouse to find out who is responsible. It is here she, with her younger sister Sora, encounter Shun Kazama, a young man who is part of the journalism club and popular with the girls at the school for his antics trying to save the clubhouse from closure. Umi is instantly drawn to Shun, and volunteers to help with the paper, and encourages the boys in the clubhouse to tidy it up as a tactic to saving it from demolition. Through her involvement, the girls at the school rally to help the boys tidy, clean and renovate the building. Meanwhile, Shun visits Umi’s boarding house home and discovers (without her knowledge) that her father might also be his. This throws him off centre and builds a wall of silence between them, much to Umi’s distress. Finally she is able to get the truth from him, but even though they now believe themselves to be brother and sister, they still profess their love for each other, and they suffer with the pain of having to put that love to one side. As this melodrama unfolds, the school clubhouse, now beautifully restored to its European splendour (it is called the Latin Quarter) is condemned by the school board. Umi, Shun and their friend Shiro head in to Tokyo to petition the school board’s chairman to come see the building and save it. Elated by her trip to Tokyo but saddened by the change in her relationship with Shun, Umi heads home to find her mother returned. She reveals all to her mother and…well, let’s not ruin the final act, eh?

I honestly cannot speak highly enough of this film. The story is compelling and incredibly moving. I don’t think I’ve ever seen tears in the eyes of fellow press reviewers before, but there were a few at the end of this sublime movie. We were fortunate enough to see a subtitled Japanese original version (I know, subtitles aren’t for everyone, but I am a Ghibli purist and whilst I always enjoy the dubbed versions, I do appreciate seeing the original and hearing the original Japanese actors) so I can’t comment on the UK dub (although the previous dubs for Ponyo, Arrietty, Howl and Spirited Away were all superb) but I am sure it will be as good as you would expect from Ghibli. This is a nostalgic film, seen from a teenager’s perspective, with a fairly predictable plot but which nevertheless leaves you feeling elated and uplifted. It doesn’t do anything radical or shocking, which some may feel is a little disappointing, and it doesn’t have the same visual flair as Spirited Away or Howl’s Moving Castle. But then this film isn’t a fantasy epic. It isn’t escapist wish-fulfilment. It is a slice of life drama with a strong comedic vein running throughout. It is a moment in Japanese history that few outside of the country are aware of, and it is an important coming of age tale that works because its female protagonist is someone we can instantly empathise with. Once again Studio Ghibli, under the leadership of Myazaki-san have offered us a strong female lead in whom we can see some of ourselves but more importantly through who we can learn about this very specific time and place in Japanese history. No, the story doesn’t take us anywhere new, but I, for one, was happy to be cocooned in the warm world of Ghibli, to be entertained, moved and entranced.

Visually the film is nothing short of sumptuous. Ghibli fans will love the hand-drawn style so reminiscent from Ponyo, Totoro and so many others. Every frame is stuffed with fine detail, depth and variety. From sweeping seascapes to winding narrow roads, from bustling ports to hectic schoolyards…everything is beautifully animated, with a slightly soft tone but vibrant lighting. Within five minutes I was sighing with pleasure at feeling so at home in this world. Much like Only Yesterday, Ocean Waves or Whisper of the Heart, this is the real world through the lens of Ghibli’s unique eye…at once recognisable and precise, yet at the same time ever so softer and more inviting. In this instance, we experienced a more grown up version of the port town in Ponyo, a teenager’s view of a busy Japanese town changing in the post war boom. I know I wasn’t the only person at the screening to be entranced by these wonderful images.

The soundtrack was equally nostalgic, sadly not by Ghibli go-to-guy Joe Hisaishi (if you’ve not heard his soundtrack to the game Ni No Kuni you are missing out on a real treat), but instead a mix of new tracks by Satoshi Takebe and Japanese versions of some period songs, some European, some American. It works very well for the style and tone of the movie, but I did miss Joe’s input, and the film doesn’t have an immediately memorable theme. Overall though, the music only adds to the brilliance of the movie.

Audio-wise you can expect the usual high-quality sound effects and sound balance. There’s nothing too bombastic or ear-shattering, but the sound designers have clearly had a lot of fun bringing the school and clubhouse scenes to life. And the soundscape of the port, and that of pre-Olympics Tokyo are vibrant and dynamic without sounding like a pastiche.

My only negative with “From Up On Poppy Hill” is that I can’t watch it again, right now. I would happily beg the lovely folk at StudioCanal for a preview BluRay…if I had a first born (I don’t) I might even offer a trade! No, seriously, if they are reading this, let me know what I have to offer to get a copy.

Hyperbole aside, this is just about the perfect (non-fantasy) Ghibli film to date. I am a real fan of slice of life anime, and to see Ghibli take the genre and do something so perfect with it was a real joy. I left the screening smiling, excited and desperate to see it again. It is a film Ghibli fans will thoroughly enjoy, but more importantly it is a film to introduce non-Ghibli fans to anime and Studio Ghibli. If you know someone who is averse to monsters and fantasy, and thinks anime is just for kids, get them to see “From Up On Poppy Hill”…it will show them just what great storytelling can be done using animation, and how anime in particular, and Ghibli specifically, can tell tales in way no-one and no other medium can manage.