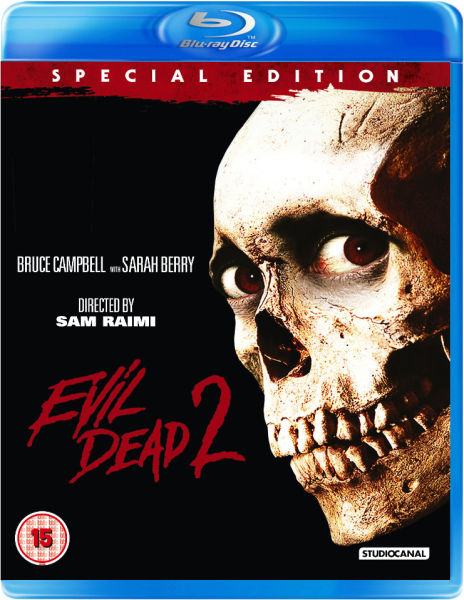 Just ahead of the theatrical release of the new EVIL DEAD movie (reviewed here) it is fantastic to see that a special edition of EVIL DEAD II on Blu-ray will be released. From horror master Sam Raimi (err THE EVIL DEAD, and other things like Drag Me To Hell) and starring the effervescent Bruce Campbell (Brisco County Jr), this Blu-ray edition contains great EVIL DEAD 2 special features new to the UK!

After the shocking and notorious cult classic EVIL DEAD impaled its way into the minds of a whole generation by becoming one of the original ‘video nasties’, visionary, maverick director Sam Raimi decided to elaborate on its twisted scenario by creating one of the most visually deranged and psychotically demented horror movies to ever splatter its way across cinema screens. Featuring b-movie legend Bruce Campbell in his most iconic role, as the fantastically unhinged Ash, EVIL DEAD II is a gore-fuelled, splatstick masterpiece.

One of the most notable things about this sequel is the fact it is actually a complete movie in itself. The reprise of the original movies events were filmed especially for this film. This is why many people think of Evil Dead 2 as a remake rather than a sequel (those people are wrong).

Ash, (Bruce Campbell reprising his role from the original EVIL DEAD), takes his girlfriend Linda (Denise Bixler: Evil Dead 2) to a secluded cabin in the woods where he plays back a professor’s tape recorded recitation of passages from the Book of the Dead. The spell calls up an evil force from the woods that turns Linda into a monstrous Deadite, andthreatens to do the same to Ash. He is forced to single-handedly battle thelegions of the damned as the most lethal – and groovy – hero in horror movie history.