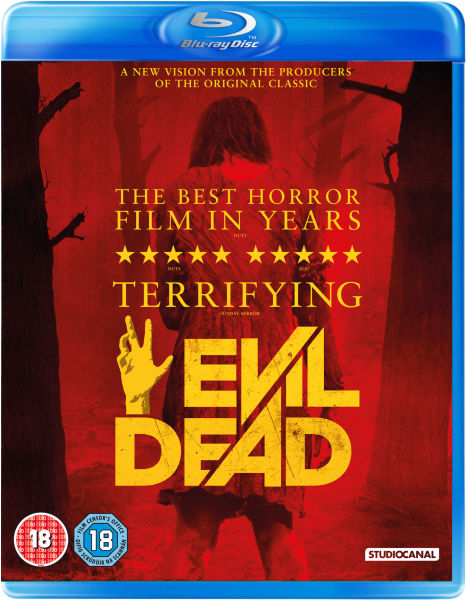 Five young people go to a cabin in the middle of the countryside. Once there, things start to get weird. Once they discover a book bound in human flesh, things become worse. Lethally so.

The Evil Dead series has always over-delivered. The big question going into the 2013 version is whether it’ll be able to do the same. Thankfully, it does. It’s a big ludicrous rollercoaster ride, which has all the signs of a big hit.

As stupid movies go, it’s very smart. It takes the original movie and gives it a far more solid grounding, with far more believable character motivations. Why are they in the middle of nowhere? Because one of their group is trying to give up heroin. Why don’t they believe her when she undergoes insane experiences in the woods? Because she’s trying to give up heroin, and is likely to be lying, self-harming or delusionary.

It also uses the demonic book to good effect, by using it to show you exactly what’s going to happen to certain characters, which means that you start anticipating it more when you watch it. This gives a different tone than the all-too-common ‘jump shots’. They’re still there, obviously, but the variety is nice.

Also, it isn’t a straight remake. There’s an intentional feeling with this that these experiences have happened to people here before, much as there was in the original. “You will die, like the other before you”. Very smartly, there’s no Ash in this film. There’s a character that could be like Ash, but the simple fact that they’re not recasting the most central character in the franchise means that all bets are off when it comes to the well-being of any of the characters.

A certain scene involving trees (which will be familiar to fans of the original) is there, but it feels less gratuitous and more justified in terms of plot development. Also, there’s an extra element involved that means that, while it’s still unpleasant, it isn’t quite as unpleasant to women as the original was. The original scene feels somewhat leering, which this one mostly avoids, which is a definite improvement.

This isn’t to say that there aren’t problems. There are major problems with it, but the overall enthusiasm of the movie means that they’re not the issue they would otherwise be.

The most obvious one is that the cast are fairly dislikeable for the most part. In the original film, the characters were less well-defined, but there was the definite idea that they liked and cared about each other. Also, there’s the point that Bruce Campbell is a difficult person to recast. He carries an innate likeability and trustworthiness, combined with a manic energy, that none of the cast in this film are able to replicate, which means that there’s a lot of heart missing from the movie.

There’s the issue that for quite a lot of The Evil Dead, it appears that the central message of the film is “women: not useful in a crisis!”. Thankfully, this doesn’t end up being as bad as it appears, but there are long stretches where this seemed to be the case, which made for uncomfortable viewing. Rewatching the original, this is more of an issue there, but it makes a lot of the new version awkward at times.

It’s extremely well shot, and learning that there was an intentional attempt to use as little CGI as possible makes it all the more impressive. The sound is also an important aspect, as it is with most horror films, and it’s very well handled here (interestingly, Bruce Campbell was involved with the sound, primarily in finding sound to use from the original film).

The amount of gore and sheer exhuberation in displaying it means that this is going to be fairly heavy going for a lot of audiences, but I think this is going to lead to it being more popular amongst audiences. It’s the first horror film in quite a long time that I could see people talking about in a ‘you’ve got to see this’ sense.

Overall, it navigates its flaws and challenges with flair, and delivers a wildly entertaining horror movie, if not as likeable as the original.