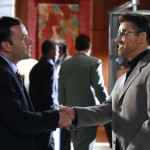 Eli Stone is a new American Scifi series soon to be seen on the UK Sci Fi Channel. With each episode in the first series named after hit record from Uk pop star George Michael. George Michael is making his acting debut on British TV screens with a recurring cameo role alongside series star Jonny Lee Miller in comical legal fantasy ELI STONE, which will come to the UK SCI FI channel this autumn.

ELI STONE stars great british actor Jonny Lee Miller (Dracula 2000) as the titular hero – an ambitious lawyer whose life is completely transformed by a series of strange hallucinations. The predictive visions are seemingly steered by the song lyrics or appearance of George Michael, taking Eli on an emotional and comical path of discovery, both personally and professionally. While medical science blames an inoperable brain aneurysm, Eli?s acupuncturist Dr. Chen (James Saito) has a different explanation? Eli is a prophet!

Eli Stone was created by duo Greg Berlanti and Marc Guggenheim, producers of the award-winning BROTHERS & SISTERS and DIRTY SEXY MONEY. Each Season 1 episode is named after a popular George Michael hit, with the pilot appropriately named ?Faith?. Other episodes include ?Freedom?, ?Wake Me Up Before You Go-Go? and ?I Want Your Sex?.

The show (commissioned for a second series already) has attracted a slew of other guest stars in the USA. Katie Holmes already drawing world-wide headlines after recording a guest-spot for Season 2.