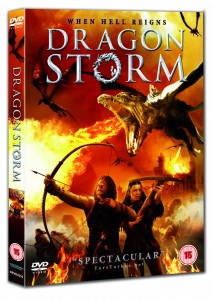 May 24th 2010 sees the much anticipated release of Dragon Storm through Revolver Entertainment.

Set in a fantasy medieval realm two Kings are feuding. King Fastrad is continually plotting to invade the neighboring kingdom of his nemesis, the noble King Wednesbury. It is not until King Fastrads castle is attacked by dragons that he must swallow his pride and beg King Wednesbury to come to his aid.

Together they must work together to protect their kingdoms from being ravaged by the deadly dragons, so a team of skilled warriors is assembled to kill the beasts.