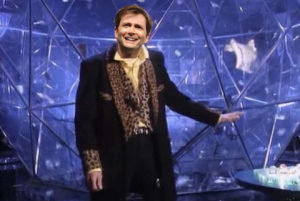 As mentioned in a number of press outlets this morning a previous Doctor Who is following in the footsteps of possibly the greatest Doctor Who there ever was (with the possible exception of the late great Gene Wilder :( ).

Yes that is right. David Tennant is taking on the role of host of the Crystal Maze. But we keep thinking that Richard O’Brien would have been a great candidate to play the essentric Time Lord in Doctor Who.

There was another host after Richard O’Brien, but he never did quite fill the shoes left for him.

I am feeling VERY old as the show has been off the air for 21 years, ending in 1995 (but that only just happened).

The Crystal Maze is to return to our television screens this autumn after 21 years off air.

The problem-solving game show, which ran from 1990 to 1995, is returning to Channel 4 in October with the former Doctor Who actor David Tennant reportedly lined up to follow the footsteps of Richard O’Brien and Ed Tudor-Pole as the host.

The classic game show will form part of Channel 4’s Stand Up to Cancer night, with celebrities as the contestants.

This is only a one off though. BUT if the ratings are good there is the possibility of a new series.

At the show’s height it attracted between four to six million viewers.

We're bringing back #TheCrystalMaze for a one-off edition to support @StandUp2C.

This is not a bad thing, just different!