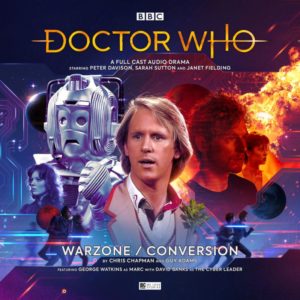 Earthshock Cybermen are back as Big Finish brings us a brand new two-part Doctor Who audio adventures – Warzone and Conversion – are released as a single set today at www.bigfinish.com.

At Warzone, competitors gather from across the galaxy to test the limits of their endurance and achieve their personal best. So, when the TARDIS materialises in the middle of a racetrack, the Doctor and his friends must literally run for their lives.

On the fringes of the galaxy, techno-pirates and research medics fight for the secrets of advanced extra-terrestrial technology. For the Doctor, however, a more personal battle awaits as he confronts his own guilt and the creatures that killed a friend: the Cybermen.