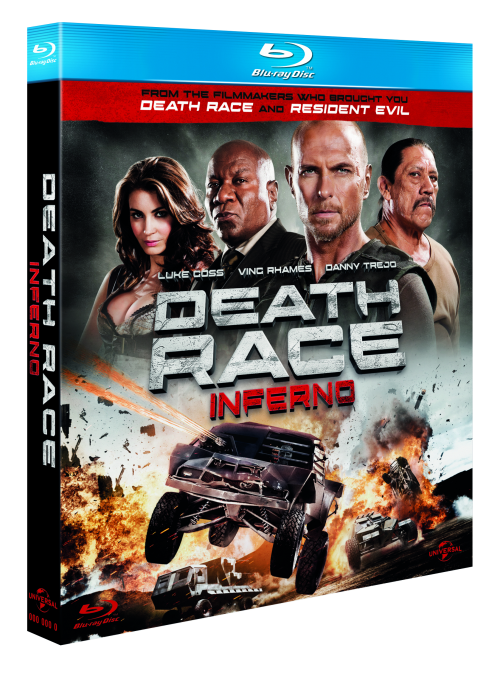 The greatest Death Race driver of all time battles for his freedom through South Africa’s infernal desert when Death Race 3: Inferno comes to Blu-ray™, DVD and Digital Download on February 4, 2013, from Universal Studios Home Entertainment. The newest Universal Studios Home Entertainment DVD Original™ finds the legendary Frankenstein in an unimaginably vicious new competition that pits teams of hardened convicts against each other in a blood-spattered, winner-take-all race through South Africa. This explosive, unrated addition to the high-octane franchise revs up the adrenaline with more extreme action, outrageous new vehicles, brutal stunts and an all-star cast. Also available on Digital Download.

Blu-ray™ disc unleashes the power of your HDTV and is the best way to watch movies at home, featuring perfect hi-def picture and perfect hi-def sound.
DVD offers the flexibility and convenience of playing the movie in more places, both at home and while away.

Bonus Features Exclusive to the Blu-rayTM

Alternate Opening
Racing For Death: Take a look under the hood and behind the wheel of the mechanical stars of Death Race 3: Inferno. From the engine designs to the safety measures put in place to protect the drivers, this featurette will give petrol heads a real look at the cars of Death Race Inferno.
Art Imitating Life: Goldberg: Gain perspective of the cast and crew on the character Goldberg and the actor who plays him, Danny Trejo. Real life experience helped Danny Trejo relate to this story. As a child he got in with the wrong crowd and served 12 years at various California prisons including, San Quentin. The ex-con considers himself to be lucky to have gotten a second chance at life. That second chance came through show business.

SYNOPSIS
Repentant convict Carl Lucas (Luke Goss) — aka Frankenstein— is a legendary driver in the brutal prison blood sport known as Death Race.  Only one victory away from winning freedom, Lucas is plunged into his most vicious competition yet: the first ever Desert Death Race. Through South Africa’s infernal Kalahari Desert, Lucas is pitted against ruthless adversaries and powerful forces at work behind the scenes to ensure his defeat.  Also, starring Danny Trejo and Ving Rhames, Death Race 3: Inferno is an insane, action packed thrill-ride.
http://www.facebook.com/DeathRace