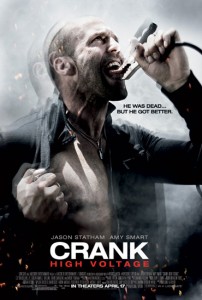 Does the strap line ruin the end of the first film?

Jason Statham returns as hitman Chev Chelios? in this sequel to Crank. Another electrifying chase is on – this time in Los Angeles in pursuit of the Chinese mobster who has stolen his nearly indestructible heart (the scifi bit). CRANK: HIGH VOLTAGE is written and directed by Neveldine/Taylor, the duo behind the 2006 hit film CRANK, and the upcoming GAME starring Gerard Butler.