How You Can Help Cleaning Up Become a Feature 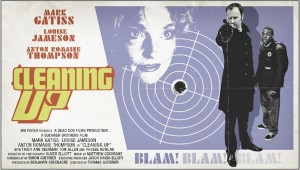 When I was organising the first Big Blue Box convention for January 2012, one of the initial stars to jump on board was the lovely Louise Jameson. One day, looking at Lou’s website, I saw she had starred in a new short film called Cleaning Up, which also featured fellow Who alumnus Mark Gatiss. I made an enquiry to the director, Thomas Guerrier, to see if I could screen the 13 minute film at my convention, and he happily said yes.

Tom wasn’t free to present the film at Big Blue Box, but his brother Simon, who had written Cleaning Up, was. I then discovered Simon already had an established career as a Doctor Who novelist and audio author, and in the grand tradition of conventions everywhere, bagged him for another panel later that day.

Over the next eighteen months, the Guerrier Brothers delivered three more exquisite shorts – The Plotters, a Guy Fawkes comedy for the 2012 Virgin Media Shorts completion; Revealing Diary, which just missed entry into a 48 hour SF film challenge (and which surely would have won if it hadn’t) and most recently Wizard, a surreal short that sets David Warner’s Merlin in a call centre. You can watch two of these shorts for free on the Big Finish website.

As I got to know Tom and Simon better, I learnt that each of these wonderful shorts were intended as calling cards, to be laid at the door of those who might back the brothers’ first feature length film. Now, thanks to Big Finish, that moment is here, and for just £1.99, you can help to get Cleaning Up – The Movie off the ground.

This is no crowd funding exercise, with myriad options for payment levels and perks. Simply download the Cleaning Up short from the Big Finish website (£1.99 for the vanilla version (labelled Rookie) or £4.99 if you want the Hitman version with extras) and proceeds from that sale will go towards a £15,000 production fund. Once established, that fund will pay for script development, storyboards, casting and design, so the Guerriers have the very best pitch for the major moneymen who could back the shoot, post production, release and distribution. 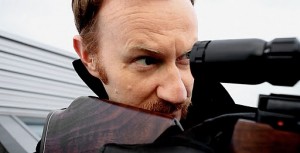 Quite frankly, what’s on offer here is a steal. For less than the price of pint, you get a great short thriller with Louise, Mark, Trscy-Ann Oberman and a blink and you’ll miss him Nick Briggs. And you get in at the ground floor of an exciting journey that will see the world of Cleaning Up extended for a wider audience. I know that Tom and Simon will be grateful for your support.

And who knows, when that oft-touted Doctor Who movie finally gets off the ground in around 2023, perhaps it will have the Guerrier Brothers at its helm.