In May 2011 AudioGO (formerly BBC Audiobooks) release a brand new audio novelisation of a 1978 Doctor Who TV adventure. Written specially for AudioGO by the serial’s original author, David Fisher, The Stones of Blood stars the Fourth Doctor (as played by Tom Baker) with companions Romana and K9. The audiobook features specially-composed music and sound design, and is read by Susan Engel, who played Vivien Fay in the 1978 story, with John Leeson as the voice of K9.

When the Doctor, Romana and K9 arrive on Bodcombe Moor in 20th Century Dorset, they find themselves confronted by a huge, ancient stone circle. On meeting the elderly Professor Rumford and her friend Vivien Fay, they learn the chequered history of the stones, and of the inhabitants of the nearby manor house ? currently one Leonard de Vries, leader of a druidic sect. But all is not as it seems, and soon the Doctor and his companions are enmeshed in a deadly web of deceit. Powerful creatures rampage across the moor, and the nature of a long family line is called into question. Romana is trapped by a cunning enemy, and time is running out for the Doctor and K9…

Release Date: 5 May 2011
Available from www.audiogo.co.uk and all good audio retailers 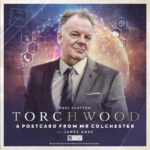