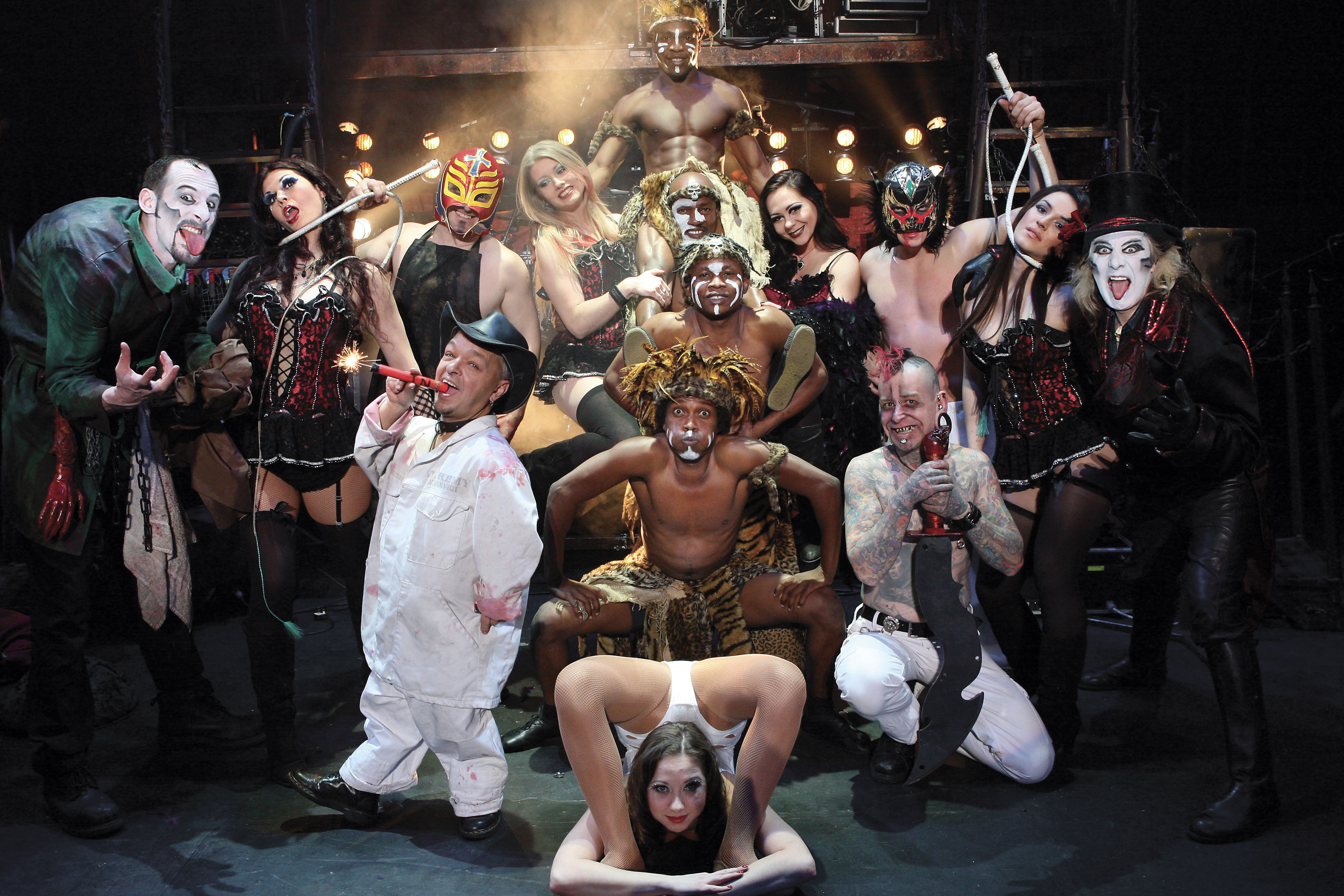 It is a staggering 15 years since the Circus of Horrors first trampled the bloody boards and has since toured relentlessly around the World achieving cult status and generally dragging Circus screaming and shouting into the 21st century and beyond.

The show will be performed for the first time in the round, in a fantastic venue that has previously housed the excellent Amanda Thompson produced show?s Eclipse & Forbidden. The Circus of Horrors will present a specially produced version of THE ASYLUM.

?It was intended to close the doors to the Asylum on the last tour but the chance of performing in such a great venue at such a great time of year was simply too much of a temptation? said Dr Haze.

The show will be retiled THE LAST DAY?S IN THE ASYLUM. It will include loads of act?s never seen in The Circus of Horrors & others making a shock return.
The height of the Globe gives the show a greater chance to use the Ariel acts and will be performed in the round & will have a new set especially for the Asylum shows.

The performance date?s coincide with the half term holidays, the last week of the illuminations & of course Halloween.

Last days in the Asylum
Set in the late 1800’s in an archaic institution in France. A side show owner, Dr Haze, buy?s the mad house to present his new show to rival the Operetta and soon to be Dance Hall of Decadence ‘Moulin Rouge’.
He sets about liberating the lunatics and slaughter the evil wardens.
While France sleeps the inmates run riot.
Once cleansed , he turns the inmates into his performers to present his new spectacular
?Bloody thirty & Burlesque?
But beware, all is not well and the show ends in an apocalyptic nightmare.
The lunatics have taken over the Asylum.
The crowd favourites as still there but are now entrapped in a Macabre Mad House until they escape and run amok into the Parisian night life. All intermingled & entwined with oddities, fakirs and death defying Circus acts
The Greatest Circus of Horrors show to Date
‘The King Pole;
Totally Unbelievable
‘Scott Mills, Radio 1’
Barnum Would be proud
‘Time Out’
Last Days in the Asylum ? threatens to stimulate all the senses & is set to surpass everything that has come before it.

Then, as the door of the Asylum slams closed forever another one franticly swings opens

THE DAY OF THE DEAD
Following on on the huge success of The Asylum, The Circus of Horrors will undergo a major
revamp with a rocking & shocking brand new show
?The Day of the Dead?. (D?a de los Muerto – A Mexican X? Travaganza).
This time set in Mexico during the early 1900?s, the cast of chasosmongers transport the body
of their doyen Dr Haze to a remote area of Mexico.
Unbeynow to them they settled in a former burial ground of Aztec Warriors.
There they join in the local inhabitants ?Day of the Dead? rituals to try & revive their
esteemed leader.
All of course with disastrous consequences.

Amid a backdrop of an Aztec Temple, Witch-doctors, Voodoo Acrobats, Pickled People,
Bendy Bodies, Demon Dwarfs, and flying Vampires erupting, chained from a tank of
precious bodily fluids, all to perform their amazing stunts.
Once revived, The Undead Ringmaster Doktor Haze will guide you through a hell of a tale with the help
of the live devil driven rock n? roll of the The Interceptors From Hell and a huge uncontrollable
cast of Toltecion Beauties, Curvaceous Creatures, Aztec Warriors, Posada?s Skeletons, Voluptuous
Vampires and some of the worlds greatest, grotesque, most daring & bizarre Circus acts.

Pierrot Bidon, director of the legendary chainsaw slinging Archaos returns to co. direct both of these strange new musical masterpiece in his own inimitable style with shocks, surprises & black humour.