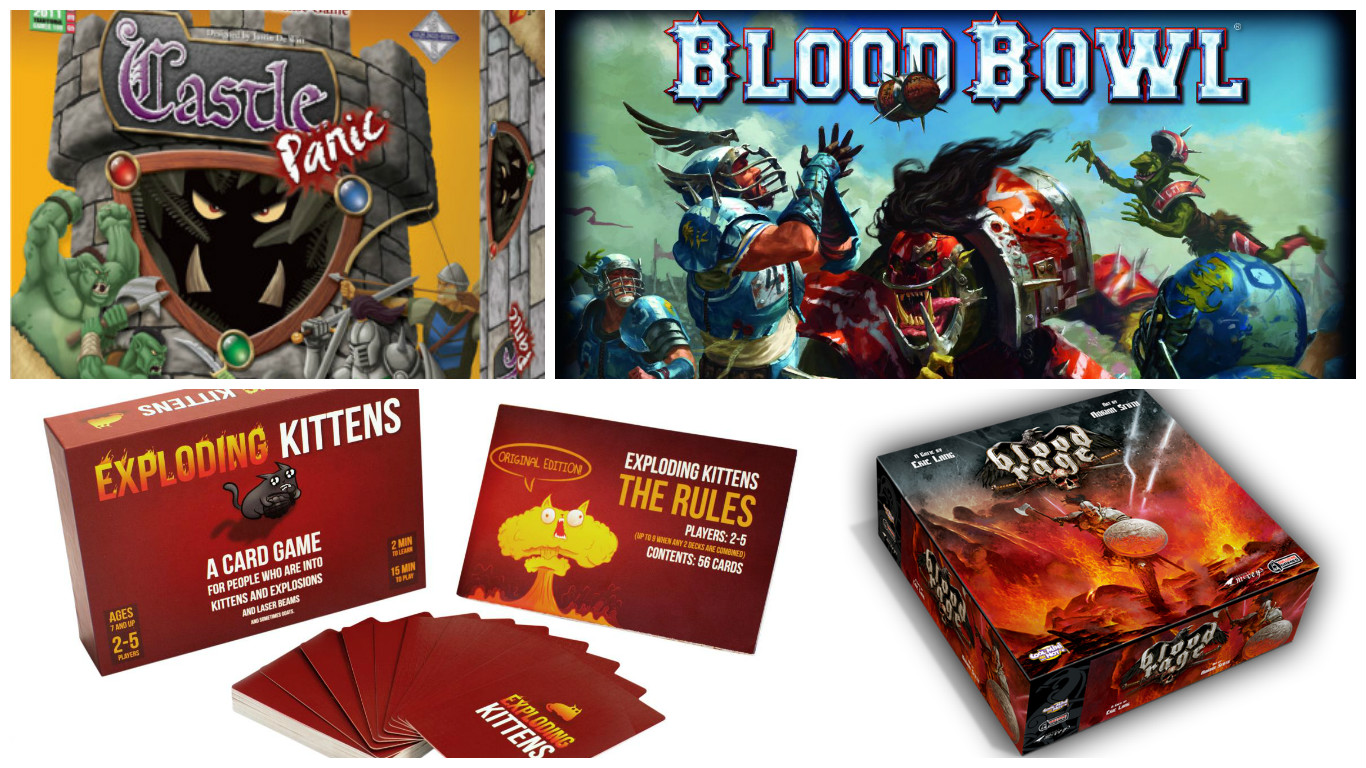 Below is a selection of board, miniature and card games we feel would be ideal for presents this Christmas. They are in no particular order, RRPs have been given to give an idea of budget.

Re release of the classic Fantasy American Football Game with Orcs vs Humans.
All miniatures are made out of coloured plastic and can just be snapped together making the game accessible to those who don’t usually do model building!

In Blood Rage, each player controls their own Viking clan’s warriors, leader, and ship. Ragnarök has come, and it’s the end of the world! It’s the Vikings’ last chance to go down in a blaze of glory and secure their place in Valhalla at Odin’s side! For a Viking there are many pathways to glory. You can invade and pillage the land for its rewards, crush your opponents in epic battles, fulfil quests, increase your clan’s stats, or even die gloriously either in battle or from Ragnarök, the ultimate inescapable doom.

Exploding Kittens is a kitty-powered version of Russian Roulette. Players take turns drawing cards until someone draws an exploding kitten and loses the game. The deck is made up of cards that let you avoid exploding by peeking at cards before you draw, forcing your opponent to draw multiple cards, or shuffling the deck.

Simple game mechanics make it great for the casual gamer.

NSFW edition with rude words and everything!

A game for those who don’t mind getting out the paints and glue. A small scale tank game with a simple mechanic allowing for quick setup but highly tactical play.
The key thing here is the LOW price when compared to it’s peers (li

ke X Wing) With the core set just £18 (half the price of X Wing) with all the cards you need to field a few good tanks (models are available in sets, they are the same as the Flames Of War models. Or other ’15mm’ scale tanks can be used). Official expansions are very well priced also.

Embark on a fantasy adventure for up to five players with Dungeon Saga: Dwarf King’s Quest. With highly detailed game-pieces and learn-as-you-play rules, this set contains everything you need to transform your tabletop into a deep and immersive world of heroes and monsters. Play a single game in just 30 minutes, or combine the carefully composed adventures for countless hours of classic quest gameplay. When the fate of the world hangs in the balance, which part will you play in the epic Dungeon Saga?

Take the lead of a survivor team and harness its members’ unique skills to achieve victory against the hordes of zombies! The infected creatures are controlled by simple rules and a deck of cards. Play 14 missions on 14 different maps made from the included modular map tiles, or create your own. Find weapons. Kill zombies. The more zombies you kill, the more skilled you get, and the more zombies appear.

A modern setting, the classic Zombicide owes more to the George A Romero movies than the likes of The Walking Dead. Other versions of the game are set in the dark ages, but for me the appeal is with the original.

Castle Panic is a cooperative tower defense board game for 1 to 6 players. The co-op element makes Castle Panic a great family game, and the perfect kick-off for your weekly game night.

You must work together to defend your Castle, in the center of the board, from Monsters that attack out of the forest, at the edges of the board. Trade cards, hit and slay Monsters, and plan strategies together to keep your Castle towers intact.

Win or lose as a team, but only the player with the most victory points is declared the Master Slayer. Players must balance the survival of the group with their own desire to win.