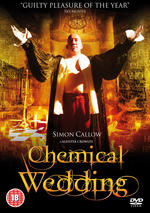 So what do you get if you cross Iron Maiden, Monty Python, a classic British actor and an Edwardian occultist?
Well I suppose you get Chemical Wedding, a big mish mash of the above, with some virtual reality mumbo jumbo added for good measure.
The film is written by Julian Doyle ( and Bruce Dickinson (Classic Iron Maiden Lead).

In a laboratory at Cambridge University, a state-of-the-art virtual reality suit is being linked to the world’s biggest super computer. Unknown to his colleagues, programmer and occult obsessive Victor Neumann has been secretly uploading all of the late Aleister Crowley’s black magic ceremonies into the computer in binary form, intending to fuse science and magic with the help of his accomplice, the stuttering Classics lecturer Dr. Haddo. When Haddo enters the suit, the addition of a random chaos equation to the mix results in his apparent transformation into Crowley himself. Wreaking havoc with the students and faculty, the professor’s new found arrogance and depraved appetites mirror the nature of his dead leader to the point where he believes himself to be the reincarnation of Crowley. Realising Haddo has knowledge that only the real Crowley could possibly possess, his colleagues finally accept that the incredible may be true and they are forced to focus their attentions on finding a way to send “The Beast” back to the hell from which he came.