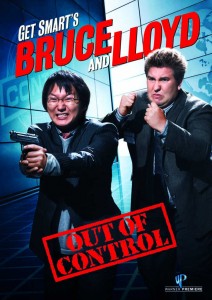 Having HEROES withdrawal – need to get Hiro back into your life before Series 3 kicks off, well the GET SMART companion DVD staring Masi Oka is out on DVD monday.

Directed by Gil Junger (10 Things I Hate About You), Get Smart?s Bruce and Lloyd: Out of Control will premiere on DVD on 1 September 2008, just 10 days after the theatrical release of Get Smart.

The hilarious spin-off shares not only writing honours (courtesy of Tom J Astle and Matt Ember) with Get Smart, but some key cast members including Masi Oka (Hiro from Heroes) and Nate Torrence (Studio 60 on the Sunset Strip). They are joined by Jayma Mays (Ugly Betty, Epic Movie) and Get Smart?s Agent 66, Hollywood hot property Anne Hathaway, who makes a cameo appearance.

Based on the incredibly popular spoof spy show of the 1960s, the Get Smart franchise has huge appeal to a contemporary audience with the updating of characters, jokes, props and of course entertainment value. Get Smart?s Bruce and Lloyd: Out of Control promises the same high quality production values as its theatrical twin and an equally hilarious comic romp as spy techie Bruce and his nerdy analyst cohort Lloyd are let loose yet again.

Bruce and Lloyd are two somewhat dim-witted R+D staffers who work at CONTROL, a secret US government spy agency, providing tech gadgets for Agent 86 (played by Steve Carell in Get Smart).

The hapless pair manage to lose an invisibility cloak whilst showing it off at the office party, an it?s down to them to find it double quick before it falls into the hands of KAOS and the Chief serves them their papers.