1963 by Niall Boyce
The Doctor takes Ian and Barbara back to Earth but the clocks have stopped and the city is silent.

The Way Forwards by Steve Case

Chaos ensues when a young boy discovers time travel for a science project.

Walls of Confinement by Lawrence Conquest
A young boy?s life is in danger as the Doctor comes face to face with a deadly predator.

Chain Reaction by Darren Goldsmith
One single coin can set off a fascinating sequence of events? if you?re a Time Lord.

Sock Pig by Sharon Cobb and Iain Keiller
The Doctor investigates why toy animals are mysteriously coming to life in a young woman?s house.

The Doctor?s Coat by John Bromley
One of the Doctor?s prized possessions goes missing on an alien planet.

Critical Mass by James Moran
Ghosts are appearing in the halls as a war machine is primed for devastation.

Letting Go by Simon Guerrier
Charley learns a lot about the Doctor when she visits the family of a dead hero.

A new adventure in time and space for the Eighth Doctor(Paul Mcgann) and his companions Tamsin and Lucie.
Anyone remember Lucie Miller? No-nonsense girl from Blackpool ? liked a laugh, said it like it was, hung around
with a time-travelling, frock-coat-wearing ponce for a while?
That Lucie Miller now lives a desperate existence in a future Earth devastated by the Daleks ? crippled, hungry
and homeless. She used to hope the Doctor might come back? but every day he doesn?t, a little bit more of her
dies.
Poor Lucie Miller. She?s beginning to think that the Daleks have got it right.
Resistance is useless.

Doctor Who: The Companion Chronicals ? 5.08 The Perpetual Bond 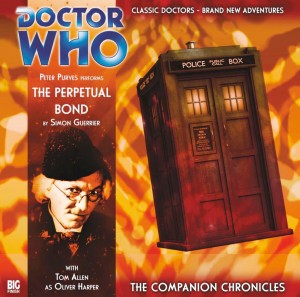 A new adventure with the First Doctor, as told by his companion, Steven.

When the TARDIS materializes in a familiar junkyard in the 1960s, the Doctor and Steven are soon embroiled in a mystery in the City of London. Who are the mysterious bowler-hatted businessmen with their deadly umbrellas?

And what secret is young Oliver Harper desperately trying to conceal?
Contracts have been signed. A deal is in place. And the Doctor discovers that perhaps not even he can stop a terrible business.