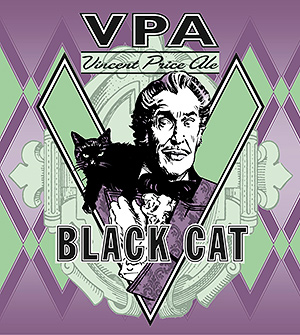 Yes we are discussing Beer!
“On SciFind why are you talking about beer?” I hear you ask. Well it is a very special type of beer.

As you know SciFind is about Scifi and Horror and this particular beer is dedicated to one of the key figures in horror cinema’s golden age.

I am talking Vincent Price. In his 82 years on this earth he appeared in over 200 productions for film and TV.

Kent based brewery Hopdaemon Beers an boast the only official beer dedicated to this icon of Horror.


And here it is, Black Cat, the VPA (Vincent Price Ale).

Officially Black Cat is “An American IPA wrapped in a dark black cape.

The smooth malty background is complemented by a crisp vibrant New World aroma from the Hopdaemon’s own expressive hopping regime.”

But how did a Kent based brewery come to be producing a beer for an American Horror Icon?

We got to ask Tonie Prins, the Hopdaemon himself:

“I am a big fan of Vincent Price and growing up in New Zealand in the 80s we kids had a bit of a ritual on a Sunday night. We used to first watch a music show called ‘Radio with Pictures’ and then stay up late for the ‘Sunday Horrors’ afterwards. We’d all talk about it bleary-eyed the next day at school.”

He goes on to tell the tale of that fateful day…

“It all started with a few beers at a tattoo parlour…

I was asked to do some beers for Savage Pencil at a tattoo parlour in Clerkenwell last year and at the opening got chatting to artists Jason Atomic and Billy Chainsaw. They liked my brews and were keen for me to do some sponsorship for their Satanic Mojo Project in Soho. Billy later introduced me to a guy called Peter Fuller, a close friend of Victoria Price (Mary Victoria Price daughter of Vincent Price), who thought it would be awesome to do a Vincent Price Ale. Victoria liked the idea and Graham Humphreys, who does amazing horror film art, was keen to do the label so we hatched a plan for a collaborative project. A year later Black Cat VPA 4.6% was born.

We are the only brewery in the world allowed to do this and I am stoked that Victoria, is on board. I think that with our passion and dedication to creating great craft beer we have brewed something that Vincent would have liked.”

You can find out more about Hopdaemon here.